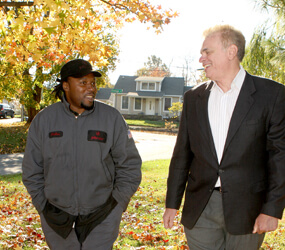 A handful of men, wearing neckties and taking notes, absorb instructions on how to impress a prospective employer.

The man leading the class is authoritative without being intimidating. He’s informed and entertained large audiences on Baltimore television newscasts, rewarding work, but not quite as gratifying, Tony Pagnotti says, as being a volunteer at the Christopher Place Employment Academy.

“This,” Pagnotti says, “has made a difference in my life. This has helped me grow as a person.”

A teacher at the college level since 2001, Pagnotti tailors a version of his Confidence in Communication course for the residents of Christopher Place, in the Catholic Charities facility that houses Our Daily Bread.

He helps men who are attempting to overcome obstacles that may include an arrest record or past substance abuse.

“What I tell my students here,” Pagnotti said, “is what I tell college students and corporate communications classes, ‘he who communicates best, wins.’ If you can sell yourself verbally and non-verbally, it’s going to help you find a job, or get a better one.

“If anything, because of the rough economy and increased competition for jobs, the basic skills of getting a job are more important than ever, and they have not changed.”

Pagnotti, 56, can relate to adults attempting to re-invent themselves.

A 33-year veteran of TV, primarily as a weatherman, Pagnotti was downsized out of a Baltimore market in the process of shedding payroll and personalities. He fills in part-time at WBFF Channel 45 and continues to teach in the Community College of Baltimore County system, all while pursuing a master’s in education from College of Notre Dame of Maryland.

A native of Scranton, Pa., Pagnotti studied broadcast journalism at Boston University, did a stint at WNBC in New York City and was long a member of the news team at WMAR Channel 2 in Baltimore.

A legendary moment in Baltimore television, preserved on YouTube, occurred when professional wrestler Randy “Macho Man” Savage refused to be interviewed until the 6-foot-5 Pagnotti sat on a stool.

Parishioners of Sacred Heart in Glyndon know Pagnotti as a lector at Mass. He and his wife, Sandy, sent their daughters to Notre Dame Preparatory School. Alee is a senior there, and Annie is a student at the University of Maryland.

Sandy works for an event planning company that had done some work for Catholic Charities, connections that led Pagnotti to volunteer at Christopher Place. On Nov. 25, the day before Thanksgiving, he completed the 12th cycle of the four-week course he teaches there.

“Volunteers like Tony, who have special expertise that can help our clients, are invaluable,” said Bill McCarthy, executive director of Catholic Charities.

In the same way that Pagnotti has gained succor from priests like Father Christopher J. Whatley, Father Silvester Kim and Monsignor Lloyd E. Aiken, his current pastor, he’s mentoring others.

Shelton Alexander is among Pagnotti’s success stories. Pagnotti helped him land a job at a Jiffy Lube. Alexander has moved onto another employer, thanks to his own industry and Pagnotti’s lessons on eye contact, a firm handshake and how to answer the open-ended question, “Tell me about yourself.”

“Christopher Place only selects those who are motivated and want to succeed,” Pagnotti says. “I tell the men, acknowledge your past and talk about how you are improving yourself.”