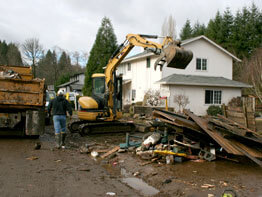 VERNONIA, Ore. – Judy Budge was happy to have her grandchildren living with her at her home in Vernonia, a remote logging town in Oregon’s Coast Range.

She just wished it was for a visit, and not because their mother’s home had six feet of water rush through Dec. 5 after two severe rain storms hit the Oregon coast and made their way through their sleepy town off Oregon Highway 47.

Vernonia was among the hardest-hit in back-to-back storms that left tens of thousands of residents without power and pounded the Pacific Northwest, killing at least five people and causing severe flooding and other major damage.

“The water just moved so fast,” said Judge Budge, a longtime parishioner of the town’s St. Mary’s Catholic Church, which was spared flooding damage because it sits on a hilltop location.

Budge saw Rock Creek and the Nehalem River come together to form a giant lake that swept through town.

More than a week later the streets of Vernonia were still caked with mud, silt and sludge from all the flooding. Toilet seats and cardboard packaging adorned trees all over town.

On Dec. 9, Oregon Gov. Ted Kulongoski and representatives of the U.S. Department of Homeland Security’s Federal Emergency Management Agency arrived in town after federal officials announced an immediate $1 million for road repair to five Oregon counties and disaster assistance to residents and businesses in two of those counties following the storms.

“We didn’t have time to get ready for anything. We went to feed our cows at 7 a.m., and had to drive through running water, when we came back 20 minutes later, it was hard to get through,” Judge Budge told the Catholic Sentinel, newspaper of the Portland Archdiocese.

Nearby neighbors waded through four feet of water to help Budge move several of her cattle to higher ground.

Stories like Judge Budge’s were repeated all over the state, particularly in Clatsop, Lincoln, Columbia, Tillamook and Yamhill counties.

Residents along the coast and throughout the Willamette Valley saw firsthand the destruction that brought 127 mph hurricane-force winds and torrential rain to western Oregon – flooding homes, washing away property, killing livestock and leaving a mess in its wake. A lot of people lost everything they had.

Two fir trees crashed through the top of the sanctuary of St. Charles Borromeo Mission Church in Gold Beach, at the mouth of the Rogue River. The trees caused a significant amount of structural damage, as well as allowing water to soak walls, vestments and whatever else was below.

“It’s a pretty big mess,” said Jerry Biewend, 68, who worked to get the trees down. “We’re going to have to have Mass in the nearby Lutheran church through Christmas at least.”

Once the trees were removed, he said, the church had to wait for “ the asbestos people to come and see what we have to do before we can start on the demolition part of the project and then the rebuilding. One of the roof’s beams is split clear across.”

In Tillamook, Sacred Heart Parish office manager Joanna Stelzig said a number of parishioners lost the roof to their house and had water damage “but everyone seems to OK physically, which we’re thankful for.”

Many coastal hospitals and clinics were hit hard by the storm, prompting medical professionals throughout the state to respond to the emergency.

A group of volunteers working out of the basement of Providence St. Vincent Medical Center in Portland was able to communicate by way of a CB-like radio system with Providence Seaside Hospital, which had lost all electrical power and phone coverage. It served as the primary communication link to Seaside for four days.