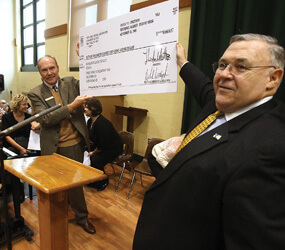 Dorothy Pabst was called “Dots” by most, loved her row home in Fells Point and detested modern technology. She cared for Alzheimer’s patients in her own old age, and before that, was devoted to her only sibling, Father Louis Henry Pabst.

Father Lou, as he was known, towered over 6-foot-4. Baseball and the Boy Scouts of America allowed him to take his ministry beyond the pulpit during a priesthood that took him to Edgemere, Woodlawn, Baltimore City and Glen Burnie.

At that last stop, Father Lou became a fixture at a parish school, teaching religion to pre-adolescents.

Friends of Father Lou had another ally, in his sister. Because he became woven into the fabric of what is now Monsignor Slade Catholic School, she bequeathed an insurance policy he had left to her to families there, who would otherwise not be able to reap the benefits of an education based in faith.

Father Lou and his sister Dorothy are gone, but they continue to give through the Pabst Family Scholarship Fund.

“You normally don’t think of religious leaving money,” said Helen Von Hagel, an administrator at Monsignor Slade who met Father Lou nearly four decades ago. “This is a family thing, and it’s what he said he would like to see happen. He’s like a legend.”

It’s one worth revisiting.

Recollections, photos and Archdiocese of Baltimore documents, supplied by friends and relatives, paint an endearing portrait of Father Lou and his sister.

They grew up on South Bond Street, two blocks west of Broadway and within spitting distance of the Fells Point waterfront. Dots was born in 1921; he came along in 1926. Long after he became an authority figure, her dry sense of humor led her to describe him still as her “little brother.”

Their education began at the St. Patrick parish school on Broadway. Both attended single-gender high schools along East 33rd Street, as she went to old Eastern High and he got into Baltimore City College.

Graduating in 1944, as World War II raged, he then spent three years in the armed forces. Upon his discharge from the military, he entered St. Charles College, Catonsville, and then St. Mary’s Seminary, first on Paca Street and then in Roland Park.

Monsignor A. Thomas Baumgartner, now retired, was a seminarian and the cross-bearer at Father Lou’s ordination in May 1956.

“Father Lou was a good-spirited guy,” Monsignor Baumgartner said. “He knew about people and learning. He’s the only priest I’ve ever known who was an umpire.”

Calling balls and strikes allowed him to enjoy America’s past-time as he took assignments at St. Luke in Edgemere; the Shrine of Our Lady of Perpetual Help in Woodlawn; St. Matthew in Northwood; and, finally, Crucifixion in Glen Burnie.

“We both loved the game of baseball,” said Father Christopher J. Whatley, the pastor of St. Mark in Catonsville who two decades ago helped with weekend Masses at Crucifixion. “He was an Orioles fan. I grew up in Queens with the Yankees, and we had some interesting discussions.

“Father Lou was respected so much as an umpire; he was in line to go to Williamsport (Pa.) for the Little League World Series. On first appearance, you might think he was gruff, but quite the contrary. He had a warm heart, cared deeply about his parish and was a very approachable guy. He lived to help the kids.”

While the Cursillo movement, the Catholic Daughters of the Americas and the Knights of Columbus were also under his direction, Father Lou always had time for children.

In 1984, he became the archdiocesan chaplain for Scouting. A decade earlier, the archdiocese had honored him with the Padre of Youth award for his dedication to the movement, as Father Lou was a familiar face at the Broad Creek Memorial Scout Reservation in Harford County.

“A boy had trouble explaining to his mother how one of the Scoutmasters had said Mass,” recalled Deacon Charles H. Hiebler, then and now a Scout leader. “He was talking about Father Lou, who would wear his vestments over his Scout uniform.”

The aforementioned Ms. Von Hagel is the assistant principal for the lower school at Monsignor Slade Catholic. She began work there as a first-grade teacher in 1970, when it was known as Holy Trinity School.

Father Lou was assigned to Holy Trinity in 1971, the same year that Monsignor Arthur C. Slade, the longtime pastor there, passed away. Holy Trinity was in the process of being subdivided into several parishes, one of them being Crucifixion, where Father Lou was named pastor upon its establishment in 1972.

“It was a small parish, but he was very active at our school,” Ms. Von Hagel said. “He would work with the middle-schoolers; he taught them religion. Father Lou had a sense of humor and the kind of demeanor that got your attention. When we needed anything, you could always count on him for help.”

Dots took a job at Armco Steel on Edison Highway and never married. After the death of their mother, Laura, in 1965, she took to doting on Father Lou and his various charges.

A friend remembers Dots removing the back seat from her Chevy Nova during Boy Scout paper drives, in order to collect as much as possible for her brother the Scout chaplain. She bought groceries for Father Lou, who took dinner at her home on Sundays and Wednesdays.

She was an eternal optimist, signed letters with an ellipsis, … – Dots, get it? – and liked things a certain way.

“Dots preferred rotary phones over touchtone, and a black and white TV over color,” said Raymond Weber, a cousin. “She used a wringer washing machine into the 1970s.”

Her orderly life was turned upside down in June 1995. Two months after Marley Little League honored her brother by dedicating one of its diamonds Father Lou Pabst Field, he was stricken with a massive heart attack and died at age 68.

Dots took on a new cause: caring for the elderly. In 2003, she left her home of 82 years in Fells Point and moved to St. Elizabeth Hall, the independent living unit at Stella Maris in Timonium.

“Feeding the Alzheimer’s patients at Stella Maris became a labor of love,” said Audrey Poulton, a cousin who married into the extended family. “It took her 45 minutes to walk to the Alzheimer’s unit, where she spent two hours each day, five days a week, but wild horses could not keep her away.”

At her funeral Mass at Stella Maris, Father Lou’s chalice was on the altar.

Father Lou’s many friends in the archdiocese included Ed Springer, who in the 1970s helped create the Division of Youth and Young Adult Ministry. Mr. Springer began a second career in the insurance business, as an agent for New York Life, where he serviced a policy that Father Lou had purchased.

Dots was the beneficiary.

“She had no children, never married,” Mr. Springer said. “She wanted to do something in (Father) Lou’s name, and she knew about his commitment to Catholic education. Her intent was that when she passed away, it would become the Pabst Family Scholarship Fund.”

“After her passing,” Mr. Springer said, “I called Greg Jones and said, ‘Guess what, you’re going to get some money.’ The school had no idea it was coming.”

The timing was providential.

“This is a great gift to us because we need it so badly, particularly in tough economic times,” Mr. Jones said. “The Pabst Family Scholarship Fund is intended for students who, were it not for tuition assistance of some sort, would not be able to receive a Catholic education.

“Perhaps you have a sibling here, and the family can’t afford to pay for another child, or it’s a new family interested that cannot afford the school. This is going to go a long, long way.”

Last Dec. 8, Mr. Springer presented the endowment for the Pabst Family Scholarship Fund. To mark the occasion, he created an oversized check at an office supplies store. Mr. Springer overheard one student comment on its physical size, “Boy, that’s a big check.”

Thanks to Dots, children will continue to get a helping hand from Father Lou.