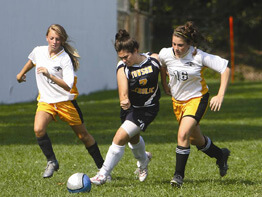 The Lady Owls of Towson Catholic High School, Towson, launched their first fall soccer tournament Sept. 7-8 on their home field, and captured the consolation round in this four-team tourney.
Towson Catholic’s head coach Chuck Teal, an 18-year veteran, was pleased with his team’s 1-0 sudden victory win over Owings Mills High School saying, “Our freshman stopper, Brittany Lanahan has a strong left foot and buried a direct kick from five or six yards out. It was a great shot.”
The Owls improved their record to 1-1 after a first round 4-0 loss to their IAAM league opponent, St. Timothy’s.
With only 15 players on the Owls’ 2007 roster, the team is certainly not deep and according to Teal, four of his players have never played organized soccer before. That said, Teal’s ability to juggle his line-up to match up with the competition will be key as the IAAM’s C Conference looks to be very strong this season.
In addition to the strength and savvy play of Lanahan, the team also has the skill of sophomore goalie Jessica Butler. Known for her phenomenal pitching ability, Butler is already being recruited by colleges across the nation from University of Maryland to UCLA.
Butler brings her soccer experience from the local recreation-leagues to the team along with tremendous athleticism and a subtle confidence that gives the Owls a solid defensive presence. Both Lanahan and Butler are team captains along with junior Erin Stein, a sweeper.
In 2006, the team’s leading scorer was then a freshman striker, Lisa Olszewski. With nine goals and three assists, Olszewski was the third top scorer in the league. This year, Olszewski is teamed up with freshman striker, Gina Toskes from St. Ursula, Parkville. As Toskes gains experience throughout the season, look for her statistics to improve as the year progresses along.
Towson Catholic’s first-time soccer tourney was a success and Teal hopes to expand it in 2008 to eight teams. For the Owls, tournament All-Star recipients were senior halfback Liz Wildt and juniors Rebecca Copenheaver, fullback and sweeper, Erin Stein.