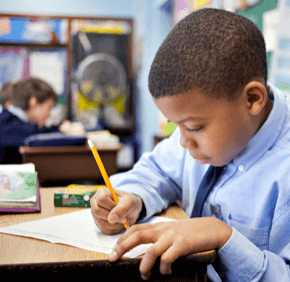 By Elizabeth Lowe
elowe@CatholicReview.org
OVERLEA – St. Michael the Archangel Parish and its school blend as seamlessly as their brick-and-mortar facades.
“As a parish-school community, it’s hard to divide them,” said Father James L. Sorra, pastor of St. Michael. “It’s one of the joys of being a pastor.”
St. Michael the Archangel School, which will graduate its 88th class this spring, is a major part of the Overlea parish’s history. The church, which was established in 1914, began celebrating its centennial last September.
“The parish and the school go hand in hand,” said Rich Olkowski, 45, a St. Michael alumnus and chairman of the school’s marketing committee. “They’re almost one and the same and mutually supportive of each other. We’re one community.”
Olkowski’s wife, Jennifer, spearheads the annual Christmas bazaar, a parish tradition for more than 75 years, which draws volunteers from the parish and school.
“It (the bazaar) is almost like a homecoming,” said Olkowski, whose family worships at St. Michael. “The alumni come back.”
Alumni from Olkowski’s family include his mother, brother, aunts, cousins and son, Kevin, who graduated in 2013 and is a freshman at Calvert Hall College High School in Towson. Another son, Mark, is a seventh-grader at St. Michael.
Like his father, Kevin Olkowski’s involvement at St. Michael has continued post-graduation.
“He (Kevin) is a sacristan on the weekends, he wants to volunteer with the bazaar and a lot of his friends are the same way,” Olkowski said. “He’s taken an appreciation for the church and his role in it.”
The Olkowskis are not an anomaly.
Patricia R. Kelly, principal for 16 years, said she taught the parents of some current students.
“When we do Grandparents Day,” she said, “I’ll say, ‘How many people went to school here?’ It’s almost like a family tradition.”
St. Michael’s faculty and staff also have longevity.
“Half of my staff has been here longer than I’ve been here,” said Kelly, who noted she is St. Michael’s first lay principal to serve for an extended period.
The Ursuline Sisters, the school’s founding teachers, taught there from 1926 to 1952. The Daughters of Charity then staffed St. Michael for 40 years, until 1992.
There are 197 students in pre-kindergarten for 4-year-olds through eighth grade, and 27 in God’s Little People, a preschool program, Kelly said.
“We’re proud to be Catholic,” said Father Sorra, who noted many students are parishioners of St. Michael. “The smallness of our school helps to engender that.”
Students, faculty and staff embrace their Catholic identity by praying the Angelus at noon, attending weekly Mass and monthly reconciliation.
“My role is to be a father to these kids,” said Father Sorra, who eats lunch with students and requires they memorize the Ten Commandments. “I am a spiritual leader.”
“St. Michael’s has created an environment that is conducive to not only the child learning,” Olkowski said, “but the child growing.”
Also see:
Gifted students get boost at Catonsville school
Renaissance man: Mount St. Joseph math, history ace also promotes mental health
PrevNext