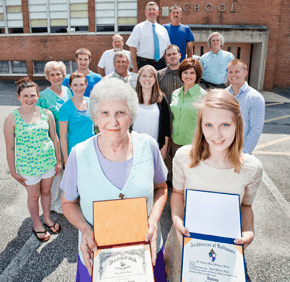 By Elizabeth Lowe
elowe@CatholicReview.org
Twitter: @ReviewLowe
Tuition was a mere $4 per student when Darlene (Single) Zeiler entered the first grade in 1951 at St. Clement Mary Hofbauer School.
“When my five brothers were in school at once, they limited the tuition … to $50 per family for a while,” said Zeiler, 68.
Zeiler was the second of nine Single siblings and one of 22 family members overall spanning two generations to grace the halls of the Rosedale school. Her family has had at least one student enrolled at St. Clement – consecutively – for 66 years.
The legacy ended June 3 when Zeiler’s niece, Sarah Single, graduated from the primary school.
“It’s amazing that our whole family could be so close and all of us could go through there,” said Sarah, 13, who will begin high school at Our Lady of Mount Carmel School in Essex this fall.
“It’s a little bit sad there’s not a continuation,” said Zeiler, a lifelong parishioner of St. Clement Mary Hofbauer. Her husband, Deacon Francis Zeiler, serves at the parish.
“There’s a legacy, there’s a commitment through generations,” said Pamela Walters, principal of St. Clement. “It’s one of the hallmarks of our Catholic school system.”
As to be expected, the school has changed over decades.
When Zeiler was a student more than a half-century ago, it lacked a cafeteria and gymnasium.
“All of us walked to school and most of us walked home for lunch,” said Zeiler, who still lives within walking distance of the parish and school. “The only thing they sold was milk.”
Changes have included additions to the building, the departure of religious sisters, evolving technology and tuition increases. Tuition for the 2012-13 school year was $4,990 – and it’s increasing by $200 for the 2013-14 school year.
What hasn’t changed is Zeiler’s involvement with the school. When her two children attended St. Clement, she volunteered in their classrooms. Since 1996 she has taught students how to sew after school.
“Darlene does amazing work with them,” Walters said. “It’s a testimony to giving back. There are legacy families (in other Catholic schools), but what makes this unique is not only the long-termness of it all, but the testimony of staying involved.”
Michael Single, 53, Zeiler’s brother and Sarah’s father, said it’s difficult to believe the family’s been there that long.
“With Sarah being the last one,” he said, “it all came to light.”
To view the 2013 graduation profiles, click here.
Copyright (c) June 29, 2013 CatholicReview.org
PrevNext