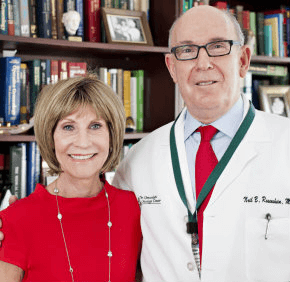 By Maria Wiering
mwiering@CatholicReview.org
Twitter: @ReviewWiering
When Susan Butler was 34, she underwent surgery for severe endometriosis in Washington, D.C. Her doctor discovered stage III ovarian cancer, the deadliest of women’s cancers. She sent Butler to Mercy Medical Center’s Dr. Neil Rosenshein, widely acclaimed for his experience treating the disease.
Now 51 and in remission, Butler travels annually from her San Francisco home to the Baltimore hospital for check-ups.
“He’s just got an air of assurance about him,” she said of Rosenshein. “He has a focus.”
The director of Mercy’s Institute for Gynecologic Care and medical director of the Weinberg Center for Women’s Health and Medicine, Rosenshein has worked as a gynecologic oncologist for more than two decades.
September is National Ovarian Cancer Awareness Month, but Rosenshein said education on the disease is important yearlong. According to the American Cancer Society, more than 22,000 women in the United States are diagnosed with the cancer annually, and 15,000 die each year from the disease, which begins in the ovaries but affects the entire abdominal pelvic cavity.
Like other cancers, early detection is key, but with ovarian cancer, that can be difficult, Rosenshein said.
“It’s probably the most feared malignancy for women, because of the unknown,” he said. The three most common cancers among women – breast, lung and colorectal – have good screening and testing options. That’s not the case with ovarian cancer.
Eighty percent of ovarian cancer cases present at stage III or higher, according to the American Cancer Society. At that point, patients have a 30 percent five-year survival rate. Symptoms, which can include abdominal distention, a feeling of fullness and changes in bladder and bowel habits, are not specific to the disease.
The risk of ovarian cancer increases with the number of times a woman ovulates in her lifetime – called an “ovulatory index.” The never-married, never-pregnant woman has a high ovulatory index, and the highest risk for developing the cancer. Hormone replacement therapies may also increase risk.
Pregnancies, breastfeeding and some types of artificial contraception (which the church opposes on moral grounds) lower a woman’s ovulatory index, reducing risk.
Women with ovarian cancer are typically diagnosed after menopause; it may occur earlier in those with family histories of the disease.
Sharon Hackerman, 66, was diagnosed with the cancer in June, and feels lucky to be treated at Mercy, she said. Years ago, her friend, a surgeon, described Rosenshein as having “hands of gold,” which stuck in her mind and compelled her to seek his practice. His expertise and approach has helped Hackerman, a personal trainer, keep a positive outlook, she said.
“Chemo day is my favorite day,” she said. “Dr. Rosenshein’s team is fantastic.”
Women should be aware of ovarian cancer, but not fearful of it, Rosenshein said. Its instance rate is one in 72 women – much rarer than breast cancer, which has an instance rate of one in eight.
Rosenshein estimates that 20 to 25 percent of his patients are being treated for ovarian cancer; the number skews high because so many women are referred to him. The more experience a doctor has with treating ovarian cancer, the better the outcomes, he said.
He reminds patients that treatment is a journey, not a one-time intervention, and that each instance of ovarian cancer is unique. Treatment typically includes extensive surgery and aggressive chemotherapy, and Mercy works to stay on the cutting edge of treatment.
For Butler, the yearly cross-country flights are worth the care she receives at Mercy, she said.
“I’m very grateful that I survived,” she said, adding that women who have shared her diagnosis should have hope. “It’s not a death sentence.”
Also see:
Cord blood donation is free and easy, but still a challenge
PrevNext