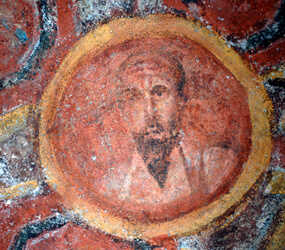 The Vatican waited until the last day of the year of St. Paul to wow the world with two surprising scientific findings: the presumed bones of the apostle and the oldest known portrait of the saint.

During a vespers service at Rome’s Basilica of St. Paul Outside the Walls June 28, Pope Benedict XVI announced that the presumed tomb of St. Paul contains bone fragments from a human who lived between the first and second century.

“This seems to confirm the unanimous and uncontested tradition that they are the mortal remains of the apostle Paul,” the pope said.

Just two days before the announcement, officials from the Pauline basilica cleverly dodged questions about whether experts had been poking around inside the tomb.

During the June 26 press conference detailing the highlights of the Pauline year, the basilica’s archpriest, Cardinal Andrea Cordero Lanza di Montezemolo, said, “It certainly is tempting” to open the enormous marble sarcophagus, “which has been there for 20 or 19 centuries and has never been opened.”

A Vatican engineer for the basilica, Pier Carlo Visconti, said they tried to X-ray it to see what was inside, but the 10-inch-thick marble was impenetrable.

When asked specifically if they still deny that a hole was drilled in the marble to insert a small camera and whether bone fragments were found, the cardinal replied, “I am not changing what we have said.”

The cardinal obviously didn’t want to steal the pope’s thunder; the pope said a “very tiny perforation” had been drilled into the marble to insert a small probe and withdraw fragments of what was inside.

Experts found traces of purple linen, a blue fabric with linen threads, grains of red incense and bone fragments that date from the time of the apostle’s death, the pope said.

Then, as if the Apostle of the Gentiles knew his special year was soon coming to an end, he made a surprise appearance before Vatican archeologists restoring a catacomb in Rome, not far from the Pauline basilica.

Restorers with the Pontifical Commission for Sacred Archeology used St. Paul’s feast day to announce in the Vatican newspaper that they had uncovered the oldest known depiction of St. Paul.

While using a laser to blast off limestone encrusting the ceiling in the catacombs of St. Thecla, archeologists made the important discovery June 19.

The beauty and detail of the fourth-century portrait was so stunning “it took the restorers’ breath away,” said one article in the two-page newspaper spread devoted to the discovery.

The image of a bald man with a stern expression, a high forehead, large eyes, distinctive nose and a dark tapered beard tipped experts off that this was St. Paul because it matched images of him from later centuries.

This portrait is in fact one of “the oldest and most detailed” portraits found in ancient Christian art, the paper said.

Even though the year of St. Paul is officially over, St. Paul probably will continue making headlines.

Archeologists working at the catacombs of St. Thecla are expected to uncover more important artwork as their restoration project continues.

And Cardinal Cordero Lanza di Montezemolo said June 26 the Vatican has not excluded the possibility of conducting a complete study of the presumed sarcophagus of St. Paul and its contents.

Because part of the sarcophagus is wedged beneath building material, opening it would mean demolishing the papal altar above it and removing the 13th-century marble baldachin.

He said the pope did not want such an invasive project to be done during the Pauline year, but “if afterwards it could be studied and done, we will think about it,” said the cardinal.

The Vatican also plans to begin a massive expansion of the Pauline basilica’s facilities.

The cardinal, who has a degree in architecture, said he has designed a new three-story building that will cover 10,700 square feet not far from the basilica.

The extra space is needed, he said, because the basilica has no storage or office space, and modern restrooms and a first aid center for pilgrims and tourists are needed.