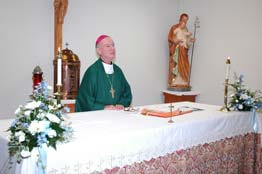 The fire that destroyed Our Lady’s Center in Ellicott City in 2001 obviously didn’t touch the heart of the popular spiritual center and gift shop.

The old chapel seated 35 and about 30 people regularly attended noon Mass, but on holy days of obligation up to 100 would squeeze into the tiny chapel.
“We have a lot of people that come on their lunch hour,” said Carolyn Niebauer, project manager for Our Lady’s Center, which is on Rogers Avenue. Priests from around the area take turns saying daily Mass and hearing confessions.

Our Lady’s Center was founded by the late Frank R. Lancelotta Sr. in 1976 as a place for prayer and contemplation. The center’s motto is “To Jesus through Mary.”

The new chapel seats 175, and the two-story building also houses the popular gift shop and bookstore. The rebuilding gave the center a chance to expand, adding a reference room and a conference room, which can be used for meetings by area groups or as a spot for retreats on the weekend.
The altar and the pews came from the Basilica of the National Shrine of the Assumption of the Blessed Virgin Mary, Baltimore; they had to be cut down to fit in the chapel, and kneelers were added.

About 200 people attended the Mass and the reception, which gave them a chance to admire the newly landscaped grounds and visit the outdoor shrine to Our Lady, a spot where people often stop
to pray.

The center is located down a wooded hill in a glen with a little creek.
“You’re almost in another time and place when you’re down there,” said
Ms. Niebauer.

Robert J. Lancelotta Sr., the son of Frank and the CEO of the center, presented a plaque and clock to Philip Adinolfi. Mr Adinolfi, an engineer who is devoted to the Blessed Mother and is a friend of the Lancelotta family, at the age of 84 accepted the challenge to oversee the rebuilding of the center. He still volunteers daily at the center.

The center’s director, Veronica Henson, who has worked there for more than two decades, was presented with a crystal bowl at the reception and received a standing ovation from those present, and Ms. Niebauer received a dozen roses.

After the fire, which caused $500,000 in damage, insurance paid some money, and the Lancelotta Foundation gave money to rebuild.

During the reception people dropped $1,500 into a donation box, “and we didn’t even mention money all day,” Ms. Niebauer said with a laugh. “We had so many donations of time and talent – it just transformed
the place.”