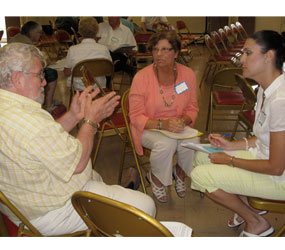 CRESAPTOWN – Nearly two months after Archbishop Edwin F. O’Brien gave his approval to establish a unified Cumberland-area parish out of five existing ones, the new “Our Lady of the Mountains” parish is taking shape.

Fifteen members of the new pastoral council, 10 members of the finance committee and five corporators were named – all evenly divided among the five church sites.

“I’m really excited,” said Rosemary Lehman, a new member of Our Lady of the Mountains’ pastoral council from St. Patrick, Cumberland. “We’re all going to be working together on a common goal.”

“People will become more settled because everyone will be represented,” he said.

At the end of a daylong discussion of hopes and dreams for Our Lady of the Mountains, the Capuchin Franciscan priests who staff the parish unveiled a new Mass schedule that takes effect Sept. 10. The schedule consolidates all daily Masses among the five churches at Ss. Peter and Paul, while providing six weekend Masses at the other four church sites – down from nine weekend Masses currently offered.

The Mountain Maryland Regional Planning Commission (MMRPC) that had developed the proposal for unifying the area parishes had recommended that St. Patrick in Mount Savage no longer offer regular Masses. As parish leaders explored Mass schedules, however, they decided that a Mass should continue in Mount Savage.

“It would have been difficult for some of the older folks to travel,” said Deacon Charles Hiebler, pastoral associate for planning in the Seton vicariate.

Deacon Hiebler said a declining population necessitated a reduction in Mass offerings in the region. Cumberland’s population has fallen to 20,859 – down nearly 11,000 from three decades ago, according to the MMRPC.

“The churches right now are a third to half full,” Deacon Hiebler explained. “The demographics just aren’t there. Most people understand the need for the alterations to the schedule.”

Archbishop O’Brien recently established Ss. Peter and Paul as an official canonical shrine. Two daily Masses will be celebrated there. On Wednesdays, confessions and adoration of the Blessed Sacrament will also be available.

“Ss. Peter and Paul will become the heartbeat of spirituality for Western Maryland,” said Capuchin Franciscan Father Gregory Chervenak, pastor of Our Lady of the Mountains.

The pastor hopes that the shrine will become a place of pilgrimage – educating people from throughout the state and beyond about Ss. Peter and Paul’s rich history and its ties to St. John Neumann and Blessed Francis X. Seelos.

“It honors not only the holiness of the past,” Father Chervenak said, “but of the present.”

Our Lady of the Mountains Mass Schedule
Effective Sept. 10