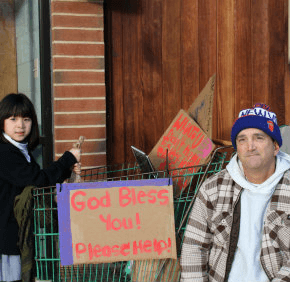 By Elizabeth Lowe
elowe@CatholicReview.org
Tom Rolando decided to show his fourth and fifth grade students what it means to be homeless, rather than just talk to them about it.
After school March 7, Rolando, a math and science teacher at Our Lady of Perpetual Help School, changed into several layers of clothing and spent 17 hours away from the comforts of his Ellicott City home.
The 49-year-old stayed outside of the Ellicott City school from 4 p.m. March 7 to 9 a.m. March 8. He slept on a sleeping bag inside of boxes.
“I tried to have an authentic experience,” said Rolando, a parishioner of Our Lady of Perpetual Help. “Even though we live in the land of ‘McMansions,’ even though we don’t see them (Howard County’s homeless) doesn’t mean they’re not there.”
Rolando’s experience differed from camping trips.
“I didn’t plan any meals, I had very limited resources going into it,” he said. “I had to hope that people were going to bring me food, water and company.”
And they did.
“I was visited by the community,” Rolando said. “I thought about the plight of the homeless and I realized how thankful I was that I had people who loved me, a house and wife to go home to in the morning.”
Rolando’s son, Tommy, a junior at Mount St. Joseph High School in Irvington, joined him from 6 p.m. March 7 to 1 a.m. March 8.
From 1 a.m. to 5:30 a.m., Rolando was alone. The mercury dipped below freezing.
“I learned a lot,” Rolando said. “It was a humbling experience.”
The takeaway for his students was that “it raised their awareness that there are people less fortunate than them in their own community,” Rolando said.
“The fact that we knew him made us feel more inclined to come and help. Isn’t that really the problem?” asked Victor Pellechia, principal of OLPH. “When you don’t know that person down the street it doesn’t mean you should treat them any differently. We rallied in support of someone like Tom, but that was part of his message. He wanted to show that especially when you know the person it takes on a whole different meaning and I think the kids really got that.”
Rolando’s night out raised more than $755 in donations and more than $430 in canned goods and personal care items for the Columbia-based Grassroots Crisis Intervention Center, which provides 24-hour crisis intervention services, emergency and transitional shelter, and community education.
Also see:
Francis Factor event – See what panelists had to say
See what people were tweeting in: ‘The Francis Factor’: Panelists, audience members discuss pope’s first year
Guest Commentary: My brief experience as a homeless man in Baltimore
PrevNext