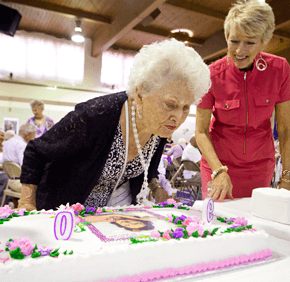 By Elizabeth Lowe
elowe@CatholicReview.org
PIKESVILLE – Liz Turnbaugh’s volunteerism can be traced to her childhood.
She was 10 and a student at Our Lady of Good Counsel School in Locust Point in 1935, when her father never came home from his job as a longshoreman. It was the Great Depression, and her family was already struggling before Ignatius Kloster was killed in a work accident.
She and her three siblings looked out for each other out of necessity.
Eighty years later, she is still caring for those without.
Turnbaugh celebrated her 90th birthday July 6 at her parish, St. Charles Borromeo in Pikesville. In lieu of gifts, she requested that some 170 party guests donate to Catholic Charities of Baltimore’s Our Daily Bread Employment Center.
The Elizabeth Turnbaugh Endowment for Our Daily Bread brought in $3,565, far surpassing her goal of $2,000.
“I am so happy with that,” she said. “My parish knows how I feel about Our Daily Bread.”
The spry senior citizen previously hosted parties in 2004 and 2008 to benefit Our Daily Bread, where she has volunteered for nearly four decades.
“I thank God every day that I’m not standing in that line, that I can help out,” Turnbaugh said. “I’m just blessed, I really am. During the day I say ‘Thank you Jesus for the blessings you gave me.’ ”
Ann Kress-Smith, a parishioner of St. Charles Borromeo, said Turnbaugh’s dedication to Our Daily Bread and her faith are inspiring.
“No one is as involved as she is,” Kress-Smith said. “Her life is based around her faith. That permeates to others.”
In the middle of Turnbaugh’s large birthday cake was a 1942 photo of her and text that read “Hmm, what will I be doing when I’m 90 years old?”
Though she doesn’t drive, Turnbaugh walks miles each day, and part of her routine is waking up each morning at 5:30 a.m. to do 100 sit-ups.
She continues to support Our Daily Bread by making casseroles, volunteering as a server in the hot lunch line once a month and donating money.
“I skimp on myself because I want to help,” said Turnbaugh, whose husband of 52 years, Walter, died in 1999. “I’d rather give than spend on myself.”
Father Raymond C. Chase, chaplain for Catholic Charities and an assisting clergy at St. Charles Borromeo, described Turnbaugh’s faith as “palpable” and “real.”
“Her faith does sustain her,” he said. “She talks to Jesus all the time and I mean that literally. He is there as her constant companion. Because she knows so viscerally what God has done for her, she has a passion to want good to happen for other people.”
Father Chase is impressed by Turnbaugh’s dedication to the charity.
“Give her a chance to talk about Our Daily Bread and she’ll take you on a ride,” he said. “It’s so endearing to see a 90 year old woman who has the excitement and the innocence of an 8-year-old who can’t wait to go do a service project.”
Kim Kahl, volunteer manager for Our Daily Bread, isn’t aware of anyone else who has hosted a similar birthday celebration for the charity.
“She’s full of energy, totally dedicated to Our Daily Bread. For 90 years old, it’s amazing,” said Kahl, who noted Our Daily Bread’s hot lunch program serves upwards of 800 people daily, 365 days a year.
“It takes a lot of people to do that,” she said. “She is a huge part of making this work.”
Kristen Kinkopf, director of mission integration and planning at Catholic Charities of Baltimore, said Turnbaugh talks about Our Daily Bread with conviction.
“She loves the people that we serve, she loves the people who work there,” Kinkopf said. “Liz is almost synonymous with Our Daily Bread. She cares about it that much.”
Also see:
St. Stephen, Bradshaw, woman recalls wartime service
Longtime St. Francis de Sales deacon, wife to leave Archdiocese of Baltimore
PrevNext