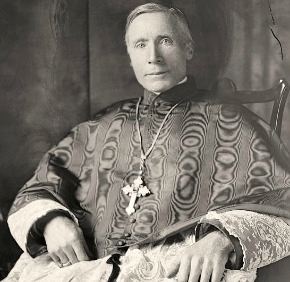 Long before the Catholic Press Association began observing February as “Catholic Press Month” in the 1950s, the publisher of what was then known as The Baltimore Catholic Review described how the Catholic press profoundly impacts the lives of its readers.
In a Jan. 13, 1917, interview with The Review, Cardinal James Gibbons recounted how in the 1870s he struck up a correspondence with a non-Catholic physician when the cardinal was a bishop in primarily-Protestant North Carolina. Cardinal Gibbons mailed books to the man, which led the doctor to ask the cardinal to baptize his family. When the letter-writers finally met, Cardinal Gibbons asked the physician what inspired him to join the faith.
“This is the first church I have ever entered,” the man replied, according to Cardinal Gibbons’ account. “There were no Catholics in my county, and the first I knew of the Catholic religion was when I read a sermon in a paper that was handed to me.”
The cardinal remembered another conversion that was inspired after a person read a copy of The Catholic Mirror, predecessor to The Catholic Review,  that had been used to wrap a bundle of goods.
Catholic newspapers should never be thrown away, the cardinal told The Review, “for you can never tell how much good can be accomplished by picking them up.”
The preeminent Catholic churchman of his time said the greatest need of the Catholic press of his era was to “be always truthful and not too fault-finding.”
“Rather use the constructive method than the destructive,” he suggested, “as it appeals more to the reader.”
The reporter who interviewed the cardinal pointed out that Cardinal Gibbons used the “constructive approach” in writing “The Faith of Our Fathers,” one of the best-selling books about the Catholic faith. The seminal work never directly attacked the beliefs of other religions, the reporter said.
If millions of Catholics would support the Catholic press, the cardinal said, “a great deal” could be accomplished.
“(The Catholic press) could explain what was preached in the pulpit and accomplish untold good in that way,” he said.
The cardinal added that the Catholic press could supplement the work of the priesthood and educate people on the doctrines of the church. Catholic media could also correct misrepresentations of history, he said.
Asked why there was no daily Catholic newspaper in the early 20th century, the cardinal pointed out that the people of his era demand the most recent news – only made possible with the assistance of costly telegraph services.
“The public and especially business people will not care to subscribe to a daily paper unless they are sure it contains the news of the day,” he pointed out, noting that one prominent Catholic had approached him about the Catholic press buying columns in a daily secular newspaper – a proposal that did not work out, for lack of capital.
Perhaps because he had a chance to interview the cardinal, the writer of the Catholic Review article concluded by asking the church leader about the prospect of universal military training – a hot topic as the First World War raged. The cardinal supported it.
“It would develop their character, bend their will, cultivate discipline and improve their health,” the cardinal said. “The young men of today, as a rule, have too little discipline and too much liberty.”

Read more from “Our Back Pages” here.