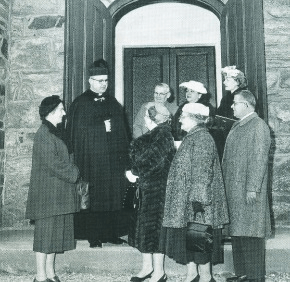 By Erik Zygmont
ezygmont@CatholicReview.org
The Dec. 2, 1865, issue of the Catholic Mirror, predecessor to the Catholic Review, noted a visit by then-Archbishop Martin J. Spalding to the private chapel of one Mr. Delmas in Abingdon, where he confirmed  22 people.
“There are about 300 Catholics in this neighborhood, who contemplate building a church early in the spring, on a lot already donated for this purpose,” the item of correspondence, which catalogued the archbishop’s travels, went on to note.
Thus began the church – later the parish – of St. Francis de Sales, which would celebrate its first Mass at midnight Dec. 25, 1866, a little more than a year later.
A community of self-starters then, the spirit has been appropriated by the parish Jubilee Committee, which is capping an ambitious year of commemorative activities – interviews with longtime parishioners, historical research, a skit or two, even a time capsule – with a special anniversary observance, 150 years to the minute from the first Mass.
Following the Christmas Eve 10 p.m. Mass at the parish’s main worship center, the congregation will be invited to process to the Stone Chapel, the original building, for Christmas carols.
“At the stroke of midnight, we’ll stop and recognize that, at that moment, on that date and in that place, we began,” said Patrick Perkins, who co-chairs the Jubilee Committee with his sister, Susan Gallagher.
With the “when” easily established, parishioners are focusing on the “why.” Every month over the past year, a family, couple or individual has stood up at Mass to explain “why they are St. Francis de Sales,” Perkins said.
Though the speakers’ demographics have “run the gamut” in a church that includes a growing Latino community and a Ruthenian Catholic Byzantine Rite Mass, their words have not.
“Almost to a person, they say it’s the warmth and the hospitality that brought them here and kept them here,” Perkins said.
Sally Raphel, a parish historian who grew up at St. Francis and returned after her 1990s retirement, concurred. She interviewed approximately three dozen families for brief features to publish in the church bulletin.
“They didn’t use the word ‘intimacy,’ but that’s what they were describing,” said Raphel, herself a member of the Callahans, eight generations of whom join the parish’s history.
According to her research, the original four-acre lot for the church was donated by William and Mary Pannell. He was the non-Catholic owner of the nearby Harford Furnace Mill; the gift was intended to help his Irish, Czech and Slovak workers.

St. Francis de Sales was originally a mission of St. Ignatius in Hickory. Its first pastor was Father Patrick O’Connor (pictured left); it became a mission of St. Stephen in Bradshaw in 1871 and its own parish in 1964.
“It is a very vibrant and active parish where people find happiness, peace, joy and commitment,” said Father John “Jack” Ward, the pastor.
In addition to the midnight observance on Christmas, a jubilee Mass will be celebrated Jan. 21, 2017, at 5 p.m.

Read more stories from “Our Back Pages” here.