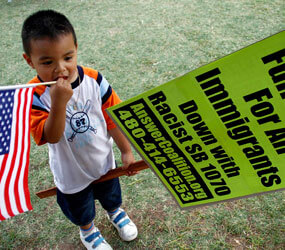 WASHINGTON – Nearly a year after Arizona passed a controversial immigration enforcement law that remains hung up in the courts, dozens of state legislatures either are considering similar legislation or have already taken up bills modeled after it.

In Mississippi, Catholic and Protestant bishops wrote a joint letter to legislators and Gov. Haley Barbour decrying an Arizona-style bill they warned would “divert law enforcement resources from core responsibilities, … have a devastating economic impact on the state (and make) simple acts of Christian charity, such as transporting an undocumented immigrant to church or the hospital, a crime.”

In Texas, 15 Catholic bishops joined another 25 interfaith leaders in calling for civility and respect as lawmakers opened public testimony on bills that would impose state sanctions on undocumented immigrants, require proof of citizenship for various activities, and require police departments to prioritize identification of possible undocumented immigrants.

“Texas legislators should be cautious when considering policies that could detract from safety and risk the inadvertent deprivation of the civil and constitutional rights of citizens and lawful permanent residents,” said the March 2 statement.

Legislators should “provide guidance and leadership to our state by rejecting policies that could encourage discrimination, co-opt local law enforcement or scapegoat immigrants,” said the statement signed by Cardinal Daniel N. DiNardo of Galveston-Houston, the other bishop members of the Texas Catholic Conference, and leaders of dozens of Protestant, Jewish and Muslim communities in the state.

Similar bills surfaced around the country, from Kentucky – where legislation modeled after Arizona’s S.B. 1070 passed the Senate in January but awaits further action – to Colorado – where a bill of the same design was pulled by its sponsor in the face of constitutional questions.

The Arizona bill would require law enforcement officers to check the immigration status of anyone they lawfully stop or arrest if there is a “reasonable suspicion” that person is in the country illegally.

In Mississippi, for example, the House and Senate passed somewhat different versions of legislation that would empower police officers to inquire about immigration status for such reasons as a driver’s poor command of English during a traffic stop.

The House bill would allow lawsuits against private employers for hiring people who are in the country illegally and subject them to fines of up to $25,000 a day. The Senate bill would allow lawsuits against governments or law enforcement officers for failing to enforce federal immigration laws. Under federal law, only the federal government is responsible for immigration enforcement.

“Because we value family unity, justice, equity, compassion, and the humane treatment of all people, we are compelled to speak out and ask that you not support S.B. 2179,” they wrote.

“The vast majority of undocumented immigrants in Mississippi are good, hard-working, family-oriented, churchgoing people who came here only to try and make a better life for themselves and their families through the sweat of their brows, like generations of immigrants before them,” the bishops said. Instead of targeting immigrants with state laws that “will undoubtedly be ruled unconstitutional,” legislators and the governor should work to get federal comprehensive reform legislation passed, they added.

After even the relatively modest DREAM Act failed to get through the Democratic-controlled Congress last fall, with the House and Senate now controlled by different parties, advocates for comprehensive immigration reform hold out little hope of federal legislation progressing.

The measure – the Development, Relief and Education for Alien Minors Act – would have young people brought to the United States as children by their undocumented parents an opportunity to go to college or join the military and legalize their status.

One early effort by the House, a March 1 hearing in the Judiciary Committee’s immigration subcommittee on the impact of illegal immigration on jobs, prompted outcries from some black Democrats, Hispanic clergy and other supporters of comprehensive reform who said Republicans were trying to “manufacture tension” between African-Americans and immigrants.

With a panel of witnesses dominated by advocates of strong enforcement as the primary approach to handling immigration, Rep. Emanuel Cleaver II, D-Mo., chairman of the Congressional Black Caucus, said in a statement that the hearing set up immigration as an “us versus them” issue, “and I reject that notion,” he said.

A joint statement about the hearing from the Rev. Derrick Harkins, senior pastor of Washington’s 19th Street Baptist Church, and the Rev. Samuel Rodriguez, president of the National Hispanic Christian Leadership Conference, said they acknowledge the economic struggles of many in their communities and their pain of unemployment, “but we reject the tactics of political leaders who use their positions of power to foster divisions and resentment between the African-American, Hispanic, and immigrant communities.”

“Justice will only come when we move beyond false divisions and turn to the real challenge,” the two ministers said, “building an economy and society that welcomes and rewards all those who seek to work hard and contribute to our general welfare.”