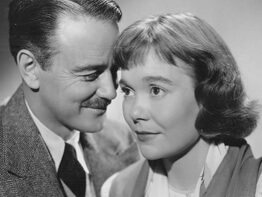 RANCHO MIRAGE, Calif. – Oscar-winning actress Jane Wyman, once married to future president Ronald Reagan, joined the Catholic Church as an adult and became a benefactor to several Catholic causes.
Ms. Wyman died Sept. 10 at her home in Rancho Mirage. The cause of death was not disclosed. While her age was placed at 90, other sources suggested she may have been 93.
“The death of Ms. Wyman marks the loss not only of a great actress, but a great woman of faith and a personal friend,” said a Sept. 10 statement from Bishop Gerald R. Barnes of San Bernardino.
“Her support of the work of the Catholic Church in the Coachella Valley and the Diocese of San Bernardino made possible many wonderful things, including the Blessed Junipero Serra House of Formation,” Bishop Barnes said.
Ms. Wyman also was a strong supporter of Hollywood’s Covenant House and Our Lady of Angels Monastery. She also reportedly went to Mass with fellow Catholic actress Loretta Young, who died in 2000.
She won an Oscar for her portrayal of deaf-mute Belinda McDonald, who is made pregnant from rape and becomes a source of scandal, in 1948’s “Johnny Belinda.” She also was nominated three other times for roles in “The Yearling” (1946), as the backwoods wife of Gregory Peck; “The Blue Veil” (1951), as a nursemaid viewed over many decades; and “Magnificent Obsession” (1954), as a blind woman romanced by the playboy who accidentally killed her husband.
Her breakout role was in the 1938 movie “Brother Rat,” where she met Mr. Reagan. Ms. Wyman also had starring roles in such films as “The Lost Weekend,” “The Glass Menagerie,” “The Story of Will Rogers,” “All That Heaven Allows” and “Pollyanna.” In all, she acted in more than 80 features.
Ms. Wyman made her last movie in 1969, but she scored later success on television in the role of Angela Channing, the matriarch of a California wine family, in the prime-time soap opera “Falcon Crest.” Her last TV appearance was on the second episode of “Dr. Quinn, Medicine Woman,” playing the title character’s grandmother, Elizabeth Quinn.
Mr. Reagan was her third husband. She later married a Hollywood musical director, Fred Karger, twice; they divorced each time. “I guess I just don’t have a talent for it; some women just aren’t the marrying kind – or anyway, not the permanent marrying kind – and I’m one of them,” Ms. Wyman once said.
Ms. Wyman and Mr. Reagan had two daughters: Maureen, who died in 2001 – Ms. Wyman placed a crucifix on top of her casket at the funeral Mass –- and a girl who died soon after a premature birth. She and Mr. Reagan adopted Michael Reagan, currently a syndicated talk-radio host.
For many years Ms. Wyman was active in the Arthritis Foundation for which she served as a national chairwoman. In 1977, she became the second recipient of the Charles B. Harding Award, the highest national award given by the Arthritis Foundation. The foundation’s Southern California chapter also created the Jane Wyman Humanitarian Award in her honor.
When not acting, Ms. Wyman painted, mostly landscapes.
She told one reporter she enjoyed solitude. “I have always felt that I was essentially alone at the beginning of my life and that I will be essentially alone at the end of it,” Ms. Wyman said.