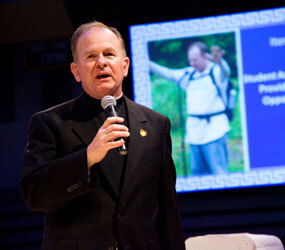 WASHINGTON – Jesuit Father Patrick J. Conroy was unanimously approved as the next House chaplain in a May 25 vote.

Father Conroy, 60, a native of Washington state, had been nominated by House Speaker John Boehner of Ohio, himself a Catholic, as the ideal candidate for the position.

The Jesuit succeeds Father Daniel Coughlin, a priest of the Chicago Archdiocese who retired in April after 11 years on the job.

Father Conroy most recently was a theology teacher, campus ministry assistant and coach at Jesuit High School in Portland, Ore., and long served as a pastor to Native Americans in the Pacific Northwest.

Boehner, who attended Jesuit-run Xavier University in Cincinnati, decided he wanted a Jesuit to serve as the next pastor and confidant to House members and staff.

Father Conroy’s nomination initially was held up by House Minority Leader Nancy Pelosi of California, who expressed concern that the Jesuit belongs to the Oregon province of the Society of Jesus, which agreed in March to pay about $166 million in settlements to 500 people who have sought damages for abuse they said they suffered under Jesuits at schools and parishes in the Northwest. She later dropped her objections.

Father Conroy has not been accused of any involvement in the sexual abuse of minors or any cover-up of such abuse.

The priest was among several priests from the Society of Jesus put forward for the position after Father Coughlin contacted the U.S. Jesuits in Washington about his retirement. The office notified Jesuit provincials around the country about Boehner’s wish.

The Washington scene will not be new to Father Conroy, a lawyer who had been a campus minister at Georgetown for a decade.

The House chaplain earns $167,800 a year, according to the Congressional Research Service. As a member of a religious community, Father Conroy does not keep his salary but turns it over to a common fund for Jesuit life and ministry.

At Jesuit High since 2004, he has served as superior of the Jesuit community, teacher of freshman and sophomore theology, assistant coach of the junior varsity softball team, campus ministry assistant, member of the school’s board of trustees, chaplain to athletic teams and director of freshman retreats.