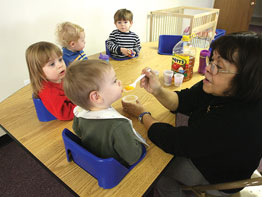 One year after the announcement that Our Lady Queen of Peace School, Middle River, would close, the classrooms are full – of preschoolers and infants.

But just a year later, both campuses are thriving.

Father Worley notes that 80 percent of the Queen of Peace families made the switch to the new model.

“I was upset at the beginning, but it was the best thing,” said Suzanne Feltz, whose son Zachary, 9, had been at Queen of Peace and is now at Mount Carmel. “His teacher is just wonderful. He’s doing so much better grade-wise.”

She’s also delighted that her son is playing CYO soccer, which wasn’t offered at Queen of Peace.

“It was hard, but for my son it’s been great,” Ms. Feltz said. “But I wouldn’t want to go through this again.”

Richard Sebour, a parishioner of Mount Carmel with two children in the school, said he was impressed with the care that was taken to make sure the incoming families felt comfortable. The Queen of Peace children shadowed at Mount Carmel, which hosted events such as pajama night to introduce them to their new school.

“The emphasis was on making families comfortable and then a smooth transition,” he said.

Our Lady of Mount Carmel and Our Lady Queen of Peace are 2.6 miles and a nine-minute drive apart.

Art and dance teachers from Mount Carmel go back and forth between the two schools, as do the principal and vice principal. On occasion, students do too, since older children serve as “buddies” to the preschoolers.

“The parishioners had a history of going back and forth to the most convenient Mass time,” Father Worley said.

Mr. Sebour also noted that children have benefitted from having the financial resources concentrated in one school, and moving the preschool from Mount Carmel to the Children’s Center freed up space to expand the seventh grade.

And the Children’s Center has ample space; two classrooms have been converted into a large indoor play space. Another large classroom has become a “messy” room with sand and water tables. Other spaces have been transformed into nap rooms, a library and infant and toddler care areas.

Mount Carmel Elementary School Principal Lisa Shipley said the Children’s Center has some 100 children enrolled, with room for 50 more. The Mount Carmel campus has 424 children in the elementary school, and it has a high school.

“Where can you go at six weeks and stay until you’re 18?” Ms. Shipley said with a laugh. “We hope to encourage young families to come here and stay at Queen of Peace, as well as encouraging families to look at Mount Carmel. We’ve created a place where we can grow with the community.”

Father Worley noted that some 3,000 new homes are planned for the area, which will create even more need for day care and preschool. And, as those children grow, the school could be converted back to elementary classes if need be.

Our Lady of Mount Carmel School and Children’s Center is positioned to meet the demand, and Father Worley said the collaboration has been “wonderful.”