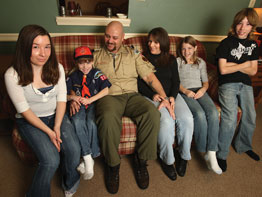 DOVER, Pa. – Ed Goad points to the newspaper photo of the scruffy, bearded man wearing a floppy hat and living under the Jones Falls Expressway.

Mr. Goad gives the 13 boys in his Tiger Scout den a little time to ponder the homeless man in The Catholic Review from 1986.

Then he tells them: That guy on the left – he’s the man who used to be me.

In this, the season of a Savior born homeless, Mr. Goad tells the Scouts about the importance of feeding the hungry, giving clothes to those who need them, providing shelter to the homeless.

It seems unthinkable, though, to the other Scouts and their parents (who took a copy of the Review article home).

Some express disbelief. He’s too articulate, they say. Or too professional. Or too intelligent. Or too much like, well, anything but a homeless person.

All of which makes his point: “Anybody could be homeless.”

“What story can I give them that will better relate on a personal level than what happened to me?” Mr. Goad said. “I’m sure there’s not too many people they know who were homeless who actually got off the streets.”

Today, Mr. Goad lives in a tidy subdivision across from the elementary school with his wife, Linda, son, Ryan, two stepdaughters and a stepson. He works nights as a nurse at a nearby retirement community. At 45, he’s bald now, but fit, healthy and happy to live in a house that he bought with his wife.

“Not a day goes by when I’m not thankful about what I have now,” Mr. Goad said. “I think about what I’ve got now and what I had to deal with then. I mean, I’ve got all the luxuries in life a person could want. I’ve got a beautiful family, and our health’s good.”

He points to the thermal socks his wife got him, then shows off the leather padding on the bottom. You come to appreciate such luxuries, he says, when you saw people on the streets who had to have their feet amputated because of severe frostbite.

The Catholic Review featured Mr. Goad and a homeless friend in a lengthy feature on Jan. 15, 1986. For six months, Mr. Goad had lived with other homeless men in a makeshift camp under the JFX. Two mattresses lay on a worn carpet, next to a frayed couch and chair. Venetian blinds and blankets tied to trees and a concrete bridge support served as walls.

But for the kindness of others, Mr. Goad said he might not be alive today.

He credits Catholic Charities’ Christopher Place – then the only male shelter open during the day – with helping him survive the streets and ultimately turn his life around. There, he showered, washed his clothes, received help from social workers and got medical attention. For meals, Mr. Goad frequented Our Daily Bread and downtown churches.

“Without the donations from people,” he said, “there’s no way I could sustain myself.”

Mr. Goad, a Dundalk native, ended up on the streets after rebounding from a turbulent childhood. He lived in a foster home until he was 8, then moved to the Dundalk home of his mother. After graduating from Eastern Vo-Tech, Mr. Goad, eager to get away from home, joined the U.S. Air Force, he said.

Stationed at Newport News, Va., he said, he took to drinking heavily on weekends. After his honorable discharge, according to Mr. Goad, he suffered a severe cut on his arm while hiking the Appalachian Trail, leaving him unable to work. He collected disability and food stamps.

Mr. Goad eventually moved into a church shelter and secured a job as a dietary aide at a nursing home downtown. He saved enough to rent an apartment on St. Paul Street.

He joined the Army National Guard in 1990 and, after seeing a medic save someone’s life, sought medical training himself.

Mr. Goad was working as a nurse at York Hospital when he met his Linda, a nursing assistant.

He told her right away he had once been homeless.

“I was proud of him for where he was and where he got to,” she said. “And I didn’t judge him at all for being homeless because it could happen to anybody.”