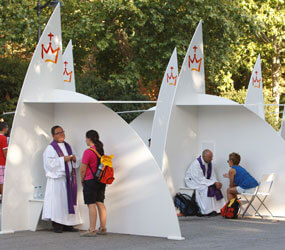 ABOARD THE PAPAL FLIGHT TO MADRID – Pope Benedict XVI described the World Youth Day celebrations as a “waterfall of light” that refreshes, nourishes and strengthens young Catholics and, therefore, can bring hope to the world.

Responding to four questions during the flight from Rome to Madrid Aug. 18, the pope told reporters that Blessed John Paul II was inspired when he instituted World Youth Day, and the celebration has brought much good to the church and the world, even if the results aren’t always evident immediately.

“God sows silently, and the seeds he plants don’t show up right away in statistics,” the pope said. It’s like the parable where some of the seeds fall on the road and just dry out, while others fall among weeds and struggle, and others fall on fertile ground and flourish, he said as he prepared to join hundreds of thousands of young people in Spain Aug. 18-21.

Obviously, he said, some of the seeds sown during World Youth Day “will be lost, but that is human.” However, he said, he was confident most of the seeds, especially the seeds of “friendship with God and friendships with others,” would continue to grow.

The best way to ensure a successful youth gathering, he said, is to offer the young opportunities for spiritual preparation beforehand and opportunities to share and to grow afterward.

Asked about how young people can be so confident of the truth of the Gospel and of the Catholic Church in a world that requires them to live with tolerance for members of other faiths, Pope Benedict said, “Freedom and truth are intimately connected.”

The pope said many people today challenge the church’s claims about truth, arguing that they make tolerance and dialogue impossible.

“It’s true that in the past, there were abuses” in asserting truth, he said, referring to times when Catholics tried to coerce or force others to believe.

They were wrong, he said, “because truth is accessible only in freedom. One can use violence to impose certain behaviors, customs and observances, but truth comes only with freely given consent.”

But Pope Benedict said it also is wrong to claim there is no such thing as objective truth that can be discovered through the use of human reason.

“This truly exposes the human person to the whim of those who have power” and end up making all the decisions without being limited by what is good, he said.

Pope Benedict also responded to a question about the global economic crisis and, particularly, its impact on young people.

“The ethical dimension isn’t external to economic problems, but internal and basic. The economy doesn’t work with just market self-regulation, but requires an ethical foundation to work for the human person,” he said.

“The economy is not measured by maximum profit but by the good it brings everyone,” so it must create jobs – especially for the young – and must respect the environment to ensure a future for all humanity, he said.