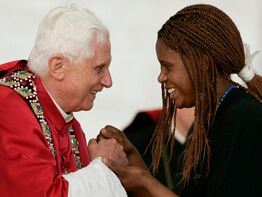 ASSISI, Italy – On a pilgrimage to the birthplace of St. Francis of Assisi, Pope Benedict XVI appealed for peace in the Middle East and a return to “responsible and sincere dialogue” to end armed conflicts.

The pope’s one-day trip June 17 marked the 800th anniversary of the conversion of St. Francis, a figure the pope described as a one-time “king of partying” who learned to make space for God.

The pope made a point of praising the 1986 interreligious gathering in Assisi, an initiative of Pope John Paul II, as “a prophetic intuition and a moment of grace.” Such dialogue is an essential part of Christianity, but must be carried out without weakening the Christian duty to spread the Gospel, he said.

The papal visit to the central Italian hill town of Assisi came during heightened tension and violence in the Middle East, especially in the Palestinian territory of Gaza, which was taken over by Hamas militia forces in mid-June.

At a noon blessing delivered from a square next to the Basilica of St. Francis, the pope said he considered it his duty to appeal for an end to violent conflicts.

“We feel spiritually close to all those who weep, suffer and die as a result of war and its tragic consequences, in whatever part of the world,” he said.

“Our thoughts go especially toward the Holy Land, so beloved by St. Francis, and to Iraq, Lebanon and the entire Middle East. The populations of these countries have known for too long a time the horrors of combat, of terrorism, of blind violence,” he said.

The pope said it was “an illusion” to believe that force can resolve conflicts and that the other side’s arguments or the demands of justice can be ignored. Only responsible dialogue supported by the international community can “put an end to so much pain and give back life and dignity to people, institutions and populations,” he said.

The pope presided over several events in Assisi, including meetings with the Franciscans who run what has become a worldwide pilgrimage center.

He defended the 1986 interreligious encounter, which had been criticized by some Catholic leaders at the time, and said it was motivated by the global recognition of St. Francis as a man of peace.

“The ‘spirit of Assisi,’ which from that event continues to spread throughout the world, is opposed to the spirit of violence and to the abuse of religion as a pretext for violence,” the pope said.

Assisi teaches people that religious belief is not incompatible with dialogue and that true religious conviction is not expressed in intolerance but in sincere respect for others, he said.

In an evening encounter with thousands of youths, the pope said he wanted to highlight the figure of St. Francis as a model for today’s young people who are searching for deeper meaning in life.

He recalled that for the first 25 years of his life St. Francis wandered around town looking for fun, good meals and material pleasure.

Many young people today fit the same description – but they have the added possibility of “wandering virtually, by navigating the Internet in search of information or contacts of every kind,” he said.

Too many youths today also seek pleasure through the “artificial paradise of drugs,” he added.

The pope noted that before his conversion St. Francis was known as a vain man, a quality that he said is reflected in the modern emphasis on image.

Sometimes the importance given to one’s image expresses an innocent desire to be welcomed by others, but often it reflects pride and selfishness, he said.

By discovering Christ, the pope said, St. Francis was able to see the world in a different way. His love for Jesus led him to give up vain pursuits and to dedicate his life to serving the poor and suffering.

The saint also learned to find inner silence and create a space for prayer – something greatly needed in modern times, the pope said.

“We risk going through an entire life deafened by noisy but empty voices,” but failing to hear the voice of Christ, “the only one that counts,” he said.

The modern world, the pope said, is contradictory, offering beautiful things along with disappointing expressions of banality, injustice and violence.

“Without God, the world loses its foundation and its direction. Dear ones, do not be afraid to imitate Francis, above all in the capacity of returning to yourselves,” he said.