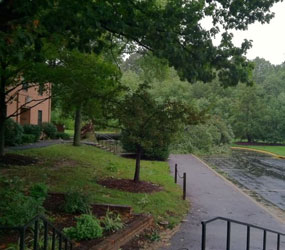 Father Michael Triplett circled back to being “duped,” a theme of Jeremiah 20:7-9, the first reading, at the end of noon Mass at Our Lady of Mount Carmel in Essex Aug. 28.

“I just learned,” the associate pastor deadpanned, “that Archbishop O’Brien excused us from Mass today.”

Father Triplett released some tension for approximately 90 worshipers after the 1-2 punch that nature unleashed on the Archdiocese of Baltimore, which dealt with the arrival of Hurricane Irene just four days after an historic earthquake closed St. Patrick in Fells Point indefinitely.

Our Lady of Mount Carmel and nearby St. Mary Clement Hofbauer in Rosedale sustained minor damage in both the 5.8 magnitude earthquake of Aug. 23, and the category 1 hurricane that pounded the Mid-Atlantic over Aug. 27 and 28.

While parishes in Eastern Baltimore County were inconvenienced and several in Anne Arundel County suffered more severe hurricane damage, their issues did not approach the logistical challenge facing Redemptorist Father Robert Wojtek at St. Patrick, where he is administrator.

The oldest parish in the archdiocese, founded in 1792, was recently made a mission of Sacred Heart of Jesus in Highlandtown, where Father Wojtek is pastor. The steeple of the current St. Patrick church, which was built in 1898, was badly damaged by tremors from the earthquake that originated in Mineral, Va.

Several limestone parts of the St. Patrick steeple were loosened and fell, gouging the sidewalk at the northeast corner of Broadway and Bank Street. According to the archdiocese, the steeple “will be selectively deconstructed and stabilized, a process that is expected to take several weeks. Once completed, the church will be reopened for use.”

The northbound lanes of Broadway remained closed until Aug. 26, when deconstruction of the steeple was put on hold for the coming hurricane.

“We didn’t have enough time to remove all the (loose) spires and limestone arches in time for the hurricane,” said Nolan McCoy, director of facilities and real estate for the archdiocese. “We banded around the steeple, and this morning (Aug. 29), we resumed deconstructing the steeple.”

An archdiocesan inspection of all steeples in response to the earthquake, the most powerful to affect Maryland in more than 60 years, was put on hold by Hurricane Irene.

“We’ll resume inspecting all church steeples today,” McCoy said Aug. 29. “The hurricane made for a small delay there. With 159 locations, that will probably take us two weeks.”

With St. Patrick’s two Spanish Masses, on Sunday morning and Wednesday evening, shifted to Sacred Heart of Jesus, the archdiocese is providing shuttle service from the St. Patrick parking lot on Gough Street to Highlandtown, departing at 8:15 a.m. and 7:15 p.m., respectively.

Hurricane Irene reached Baltimore mid-day Aug. 27. The next morning, with high winds and rain lashing the eastern part of the archdiocese, Father Wojtek said that one hearty worshiper took advantage of the archdiocesan shuttle from St. Patrick to Sacred Heart of Jesus.

“I sent the bus on its way, and drove him back to St. Patrick after Mass myself,” Father Wojtek said the evening of Aug. 28. “I don’t know how much of that limited turnout is word still getting out about the Mass being moved, and how much of it is about the weather.

“The Saturday evening prayer group at St. Patrick also moved to Sacred Heart. They were out in force just as the weather was turning bad.”

After the hurricane, McCoy, of the archdiocese, said that “a total of 18 locations (in the archdiocese) reported some level of damage. Nothing has been reported as a facility that can’t be used.”

St. Andrew by the Bay in Annapolis and Holy Family in Davidsonville were among those reporting water damage.

Archbishop O’Brien did, in fact, excuse Catholics from fulfilling their Sunday Mass obligation, but that didn’t stop St. John the Evangelist in Severna Park from making do, despite no power and a large tree that was uprooted outside the building that has served as its parish center and rectory.

“We canceled our first two Masses Sunday morning,” said Father James Proffitt, pastor, “but for the other three (10:30 a.m., noon and 5:15 p.m.), we crammed into the gathering space. We set up chairs and some people stood, but Mass went on.”

Its priests had been residing in the same building that houses parish offices, and the purchase of a nearby four-bedroom home for a new rectory proved fortuitous.

“We literally settled on that house the day of the earthquake,” Father Proffitt said. “We didn’t have any furniture moved in when the hurricane took out the power, but it does have a generator.”

Father Proffitt said that Father Michael Foppiano, associate pastor, “slept on the floor” of the new rectory the evening of Aug. 28, and that a mattress and box spring were being moved in for retired Monsignor John J. Auer, in residence at the parish.

“The irony,” Father Proffitt said, “is that my office in the parish center is moving to the second floor, in what had been my bedroom. I told everyone I needed a new light, because there was a big tree in front of the window. That’s the tree that came down during the hurricane. There’s a lot more light in that room now.”