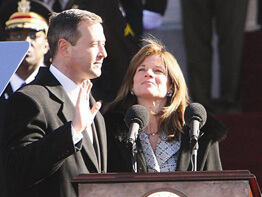 While leaders of the Maryland Catholic Conference were pleased that Gov. Martin J. O’Malley included money in his budget for nonpublic school students, they expressed deep disappointment that he boosted funding for embryonic stem cell research and did not support a proposed abortion alternatives program promoted by Cardinal William H. Keeler.

Just one day after taking office, the governor unveiled his first budget Jan. 18 in Annapolis.

While Gov. O’Malley’s budget provides $5.2 billion in K-12 public education, including a $680 million increase in school aid and $400 million in school construction, it only allots $4 million for the textbook/technology program in nonpublic schools. Catholic leaders had sought a restoration of funding to $6 million – the funding level when the program was launched by Gov. Parris N. Glendening in 2001.

“I’m glad the program is continuing, but we really needed a restoration of funding to accommodate all the new students in the program,” said Mary Ellen Russell, associate director for education with the Maryland Catholic Conference.

Ms. Russell noted that while funding has slipped in recent years, 10,000 new students have enrolled in the program.

As in past budgets, Gov. O’Malley’s per-pupil textbook and technology allocation is $90 per pupil at schools where 20 percent or more of the students are from low-income families. Per-pupil allocations for students at the remaining schools are determined by the number of participating students.

Ms. Paltell said she hoped the state legislature would reduce or strip the money from the budget.

Ms. Paltell was also displeased that the new governor provided no money for an abortion alternatives program that would have aided women in crisis pregnancies who choose to have their babies.

“It’s really sad to see that the administration saw fit to continue to provide money for abortion, but I didn’t see anything for assisting agencies that support women in crisis pregnancies,” said Ms. Paltell, referring specifically to a new women’s services program pushed by Cardinal Keeler and the state’s Catholic bishops. Catholic leaders had asked for $1 million in funding for the proposed program – noting that $13 million was spent last year on family planning clinics that promote abortion.

“My hope is that the administration will put the money in a supplemental budget,” she said.