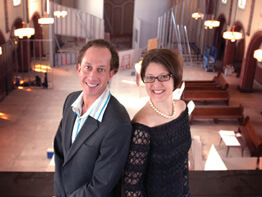 ST. LOUIS – When the Archdiocese of St. Louis put the real estate property of 20 closed parishes up for sale, with the proceeds to follow members of those closed locations to their new parish homes, the goal was to find the right buyers for the buildings.

The archdiocese was determined to sell those properties in a timely fashion for the best price available, while making sure all reuse of the buildings would be proper and appropriate, said Thomas Richter, director of the archdiocesan Office of Building and Real Estate.

But the properties in the urban South St. Louis Deanery and the suburban Northeast St. Louis County Deanery were quite dissimilar, so two different commercial real estate agencies – each with expertise particular to the type of properties to be sold – were chosen to market them.

“A number of the parishes in North County were built in the ‘50s and ‘60s,” Mr. Richter said. “Quite often the churches were in the building that was intended to eventually be transformed into a gym, after a new permanent church was built. That was part of their appeal, since these churches were easily adapted by schools and the smaller Christian church groups.”

“We were very successful in getting people who will use those properties in a manner that will enhance the community,” said Father A. John Schuler, pastor of Our Lady of Guadalupe Parish in Ferguson. “They are going to be making reverential use of the properties.”

In South St. Louis, some church buildings have been sold to other denominations. Other properties are being used for different – but church-approved – uses, including an advertising agency and a band headquarters.

Johnny Londoff Chevrolet bought the former Our Lady of Fatima Parish property in Florissant to expand the auto dealership. Lindenwood University bought two acres of that property as well as the church and school building to use for adult education classes.

“We’ve been here since January 2006,” said Lindenwood site director Jim Jump. “This couldn’t be better for our students. It’s right off I-270, easy to get to. Right now we have over 500 students a week, classes in the evening.
The setup is as good as we could imagine, as far as classroom size and availability.”

In South St. Louis, some things haven’t changed too much. The old Holy Innocents Parish is no longer a Catholic church but now home to Journey Fellowship, an interdenominational Christian church.

“We have all four buildings – the church, rectory, convent and school,” said Jim Beckemeier, a member of Journey Fellowship’s board of elders.

“We are very happy here. We’ve been using the church the most,” he said. “We renovated it pretty significantly, updating it from a technological standpoint because our style of worship involves a band, electric guitar, drums – it needed a lot of sound treatment. And we added some seating, things of that nature.

“But we have been able to maintain a lot of the natural beauty of the building, the natural stone and the stained glass. We think this is a great building, very pretty,” Mr. Beckemeier said.

“We love the building and we are honored to have it,” said Chris Frank of the church. “We felt like a lot of weddings, funerals, baptisms happened here. It is still a holy space to us. In fact, my grandmother attended this church.”

The interior of the church will retain what the Mr. Franks call its “architectural integrity.” The interior church space of about 10,000 square feet will eventually contain offices and conference rooms of varying sizes.
Immaculate Conception Church is now home to the Compton Heights Band, in a lease-purchase agreement that includes the rectory.

The band performs old-fashioned John Philip Sousa-style band concerts year-round, with its main season in the summer. “We’ve never really had a permanent home,” said Harry Swanger, founder and executive director of the band. “This building is perfect. It’s breathtakingly beautiful and the acoustics are very good. It is just spectacular.”

Mr. Swanger said the church is currently used for rehearsals, but he plans to eventually use it as a concert hall.

“We’re a preservationist organization, continuing the John Philip Sousa tradition of American concert band music, so that philosophy leads us to this, maintaining this magnificent building,” he said. “We are applying to have it designated a federal and state historic structure.”

Proceeds from the sale of the closed parish properties exceeded $20 million, Mr. Richter said, emphasizing that all proceeds, after payment of any remaining debt, follow parishioners to their next parish.

“To the point that, if say 60 percent of parishioners of a closed parish went to one parish and 40 percent went to another, the money from sales would be divided 60-40. The archdiocese was very careful about that,” he said.