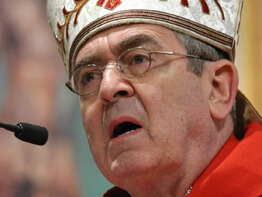 WASHINGTON (CNS) – A pro-life official of the U.S. Conference of Catholic Bishops criticized House passage Jan. 11 of a bill that would expand federal funding of stem-cell research that involves the destruction of human embryos, but expressed confidence that an expected presidential veto of the “misguided and unethical legislation” would stand.

Richard Doerflinger, deputy director of the bishops’ Secretariat for Pro-Life Activities, said in a statement that the 253-174 vote indicated that there were not enough votes to override the veto that President George W. Bush has promised.

The bill now goes to the Senate for a vote; if it passes there, it will be sent to the White House for action by Bush.

But Doerflinger said both houses of Congress should turn their attention “to stem-cell research that poses no moral problem – constructive research that is already beginning to help patients with dozens of conditions in clinical trials.”

Noting that most Americans prefer stem-cell research that takes place “without harming or destroying human life at any stage,” Doerflinger said, “The truly statesmanlike approach to this issue would be to take up this challenge, supporting medical progress that all Americans can live with.”

Before the vote, Philadelphia Cardinal Justin Rigali, chairman of the bishops’ Committee on Pro-Life Activities, urged House members to “consider the fundamental moral line” they would cross if they approved H.R. 3, the Stem Cell Research Enhancement Act of 2007.

Cardinal Rigali called it a “sad reality” that other forms of stem-cell research have received inadequate funding and attention while there has been “an exaggerated and almost exclusive focus on destructive embryo research in the political and policymaking arena.”

“Even the national cord-blood stem-cell bank that Congress approved a year ago, which could benefit many thousands of Americans immediately, has received minimal funding,” he said.

Other forms of stem-cell research made news Jan. 7 based on a report from scientists at Wake Forest and Harvard universities that said the amniotic fluid surrounding a child in the womb can be the source of medically useful stem cells. The report was published in an online edition of the journal Nature Biotechnology.

In a letter to House members dated Jan. 9 and released Jan. 10, Cardinal Rigali said the lawmakers should support “better solutions” than the “most speculative and most divisive type of stem-cell research,” that which involves the destruction of embryos.

“On a practical level, embryonic stem-cell research has been as disappointing in its results as it has been divisive to our society,” he said. “After almost three decades of research in mouse embryonic stem cells and nine years in the human variety, researchers can scarcely point to a safe and effective ‘cure’ for any condition in mice let alone human beings” using embryonic stem cells.

“At the same time,” he continued, “ethically sound research using nonembryonic stem cells has continued to advance, helping patients with over 70 conditions in early peer-reviewed studies.”

“Since Congress debated this issue last summer, further evidence has emerged on the versatility of adult stem cells, and on the likelihood that they can be reprogrammed to enhance this quality,” he said.

Cardinal Rigali told House members also to consider “the fundamental moral line” they will cross by approving the measure.

“The federal government has never taken the crass utilitarian approach of forcing taxpayers to support the direct killing of innocent human life, at any stage of development, in the name of progress,” he added.