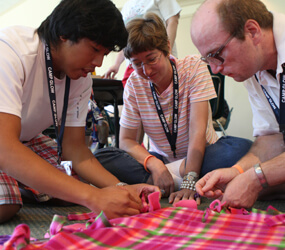 Twenty miles north of Baltimore City, an unassuming building blends in with the rural town of Sparks.
A person could drive up York Road and right past the Monsignor O’Dwyer Retreat House. When Christmas lights were hung out on trees outside the complex last year, people found it easier to spot at night. The decorations have stayed ever since.

The retreat house has always been an inviting light for youths of the Archdiocese of Baltimore.

“I often tell kids I went to public school my whole life,” said Father Martin S. Nocchi, the retreat house director. “I tell them, ‘At times, you don’t know how lucky you are. There’s just a whole lot of potential in this retreat house.’” Founded by Monsignor Clare J. O’Dwyer and built for youths and young adults (eighth grade through college), the goal of the center is to provide personal and spiritual development. Youth groups, camps and schools use the facility for retreats, most of which are overnight. About 86 students can be housed at night.

Father Nocchi said the facility is currently booked all the way through Thanksgiving.

When the originally named Catholic Youth Organization Retreat House opened in 1963, Monsignor O’Dwyer wanted it to be a “spiritual powerhouse for young people.”

It was renamed after Monsignor O’Dwyer’s death in 1982 and is the only retreat house for youths in the archdiocese. More than 8,000 young people a year take part in activities at the 16-acre facility.

The retreat house features a meditation garden and recreational facilities that include a swimming pool as well as basketball and sand volleyball courts.

Inside the building, there are four main meeting areas, small rooms and a chapel where thousands have worshipped.

Bill Fleming, coordinator of catechesis for persons with developmental disabilities, has several events at the retreat house throughout the year. One of the biggest getaways is the weeklong Camp Glow, which has two sessions a year.

“What I love, too, is the space,” Fleming said. “We use virtually every room during camp.”

People with special needs engage in arts and crafts there, as well as dances during the week.

The facility also has a kitchen that serves breakfast, lunch and dinner.

During the summer, the retreat house is used for one week as the home of the archdiocese’s High School Leadership Institute (High-LI).

Margaret Brogden, coordinator of youth ministry formation for the archdiocese and director of High-LI, said it is “the perfect place for us to teach leadership skills within the context of our faith. It is a place that the kids call home.”

City parishes such as St. Ambrose and St. Gregory the Great also recently had a chance to have a retreat there.

“It was a great experience for everyone involved,” Brogden said. Father Nocchi said young people can evolve and deepen their faith.

“I get countless letters from parents saying thank you and ‘I don’t know what happened there, but my child is a different person,’ ” Father Nocchi said. “It gives you the courage to keep doing what you’re doing.”