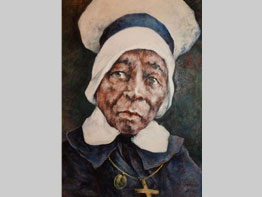 When the Oblate Sisters of Providence say you can have a ball without leaving home, they really mean it.

For the twelfth year, the Baltimore-based religious order is sponsoring its “Stay at Home Ball,” a fundraiser that doesn’t require getting all gussied up or enduring a rubber-chicken dinner. Participants simply mail their donations to the Sisters, and the Sisters pray for them.

The annual “event” usually raises about $10,000, according to Sister Magdala Marie Gilbert, director of the Mother Lange Guild. This year, the proceeds will be used to purchase audiovisual equipment for the Mother Mary Lange Historical and Artifacts Room at the Oblate motherhouse in Arbutus and the Mother Mary Lange Room at St. Frances Academy in East Baltimore.

Mother Lange founded the Oblate Sisters of Providence in Baltimore as the first religious order for African-American women. She established St. Frances Academy in 1828 to educate the children of slaves and former slaves.

The Mother Mary Lange Historical and Artifacts Room provides information about the life and ministry of Mother Lange. The order’s foundress lived and died in the same room that is named in her honor at St. Frances Academy.

“It sure beats having to leave the house,” the Oblate Sister of Providence said with a laugh. “For us, it’s like having your cake and eating it too.”

With Mother Lange under consideration for sainthood, Sister Magdala noted that more people are visiting the motherhouse to learn about Mother Lange’s life. The Mother Lange Guild helps promote the canonization effort.

Dr. B. Curtis Turner, principal of St. Frances Academy, said he will be participating in this year’s ball. He called the event an “untraditional” but “very smart” fundraiser.

“Just think of all the overhead costs that are spent on a banquet hall and clothes,” he said. “All the money that would have been spent on those things goes to the Oblates.”

Donors are asked to send their contributions by Nov. 19. Their intentions will be remembered at Mass on Thanksgiving Day, and their names will be published in a future Oblate newsletter.