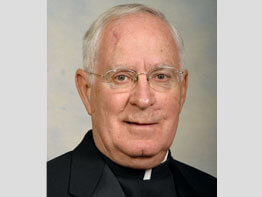 CARROLL, Iowa – A funeral Mass was celebrated Feb. 14 at Holy Spirit Church in Carroll for Oblate Father Darrell Rupiper, a prominent peace activist who in recent years began a ministry preaching about the environment and the integrity of creation.

In 1980 he led a team to Tehran, Iran, to try to defuse the hostage crisis in which Americans had been seized the year before and held 444 days before being freed.

He made two visits to Iran in the first half of 1980, the second of them with two Methodist ministers to lead Easter celebrations for the hostages. Upon his return, the priest complained that the White House was “conducting a well-orchestrated effort to belittle Iran” and that the news media were trying to create “war hysteria” among the U.S. people.

After the hostages were freed in January 1981, Father Rupiper confirmed that a hostage had slipped him a note, but that he had no chance to read it before the Iranian captors demanded he hand it over. The note’s message contradicted claims made by the captors that the hostages had been treated well.

Ordained in 1963 for the missionary order of the Oblates of Mary Immaculate, he was once expelled from Brazil for teaching human rights.

In 1982, he was sentenced to 30 days for trespassing at the Strategic Air Command Base in Omaha, Neb., to protest nuclear weapons. Upon his release, he said God had called him to civil disobedience – “often called divine obedience,” he added.

In 1983 he said in an interview that people involved in civil disobedience do it “not because it is more effective, but because it must be done.”

Father Rupiper once served as a chaplain at the University of Illinois’ campus in Springfield.

In recent years he headed an environmental ministry preaching the integrity of creation. He called the retreats he gave “ecomissions.” They were retreats, workshops and talks designed to be spiritual, informational and consciousness-raising events that would serve as springboards to action. Between 2003 and 2006, he estimated he had given 45 such ecomissions in Chicago-area parishes.

His life was detailed in the book “Prophets Without Honor: A Requiem for Moral Patriotism,” written by his seminary classmate, William M. Strabala.