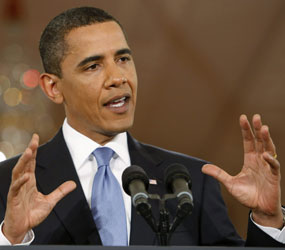 WASHINGTON – President Barack Obama in his April 29 press conference said the Freedom of Choice Act was not his “highest legislative priority” and that he is instead focusing on reducing unwanted pregnancies.

“I believe that women should have the right to choose,” he said, “but I think that the most important thing we can do to tamp down some of the anger surrounding this issue is to focus on those areas that we can agree on.”

Some organizations that support legal abortion as well as some pro-life groups, including the Catholic Health Association and Democrats for Life, have said the Freedom of Choice Act, known by its initials as FOCA, was unlikely to move in Congress.

FOCA has not been introduced in the current Congress. Versions of it had been introduced in nearly every session of Congress for the last 20 years. Only once, in 1993, did the bill make it as far as being considered by committees. It has never reached the floor of either the House or Senate.

Chicago Cardinal Francis E. George, president of the U.S. Conference of Catholic Bishops, said in a May 1 statement that he welcomed the president’s words that “the Freedom of Choice Act is not his highest legislative priority.”

The cardinal stressed that many people have been “working tirelessly to express their concerns about FOCA and FOCA-related legislation” and that “many people of different religious faiths or none will continue to work respectfully and insistently not only to reduce abortions, but to eliminate them.”

During the press conference, Obama said a task force operating under the Domestic Policy Council “is working with groups both in the pro-choice camp and in the pro-life camp to see if we can arrive at some consensus on that.”

According to White House spokesman Shin Inouye, various White House offices – the Domestic Policy Council, the President’s Advisory Council on Faith-Based and Neighborhood Partnerships and the White House Council on Women and Girls – have been “working together on developing strategies to reduce unintended and teenage pregnancies, support maternal and child health and reduce the need for abortion.”

“As part of their work,” he said in an April 30 e-mail to Catholic News Service, “they are conducting outreach to stakeholders on all sides of these issues.”

An analysis of the most recent version of FOCA by the USCCB legal counsel warned that it would wipe out existing state restrictions on abortion and impede states’ ability to regulate abortion.

According to a fact sheet distributed by the National Committee for a Human Life Amendment, which has ties to the USCCB, the legislation as introduced in the 110th Congress “declares that it is the policy of the United States that every woman has the ‘fundamental right’ to terminate a pregnancy.”

“The act prohibits government at every level (federal, state and local) from ‘interfering’ with a woman’s right to choose, and from ‘discriminating’ against the exercise of this right,” it adds.

A nationwide postcard campaign against FOCA and other abortion-related issues was sponsored earlier this year by the USCCB. It asked members of Congress to “oppose FOCA or any similar measure, and retain laws against federal funding and promotion of abortion.”

Many pro-life organizations have focused their concerns about FOCA on a reply Obama gave to a question during a July 2007 campaign appearance before a Planned Parenthood group, when he said signing the bill would be “the first thing I’d do as president.”

In response to the question at the April 29 press conference about that comment, Obama also elaborated on his views on abortion.

“I think abortion is a moral issue and an ethical issue,” he said. “I think that those who are pro-choice make a mistake when they – if they suggest – and I don’t want to create straw men here, but I think there are some who suggest that this is simply an issue about women’s freedom and that there’s no other considerations. I think, look, this is an issue that people have to wrestle with, and families and individual women have to wrestle with.

“The reason I’m pro-choice is because I don’t think women take that position casually,” Obama said. “I think that they struggle with these decisions each and every day, and I think they are in a better position to make these decisions ultimately than members of Congress or a president of the United States – in consultation with their families, with their doctors, with their clergy.”