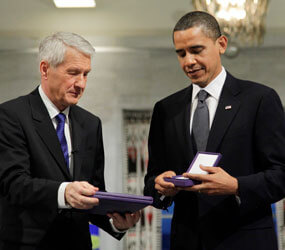 OSLO, Norway – U.S. President Barack Obama, accepting the Nobel Peace Prize Dec. 10, said extremists who “kill in the name of God” have a “warped view of religion” that is incompatible with the purpose of faith.

He also addressed the concept of just war and said faith in human progress is one of the best aspects of humanity, a “moral compass” or a “North Star that guides us on our journey.”

Obama said that compared to some of the past Nobel Peace Prize winners his “accomplishments are slight.”

“But perhaps the most profound issue surrounding my receipt of this prize is the fact that I am the commander in chief of the military of a nation in the midst of two wars,” he said, referring to Iraq and Afghanistan. “One of these wars is winding down. The other is a conflict that America did not seek, one in which we are joined by 42 other countries – including Norway – in an effort to defend ourselves and all nations from further attacks.”

Obama said that, given the pace of globalization, it should not surprise anyone that “people fear the loss of what they cherish about their particular identities … perhaps most powerfully, their religion,” and this has led to conflict.

“Most dangerously, we see it in the way that religion is used to justify the murder of innocents by those who have distorted and defiled the great religion of Islam, and who attacked my country from Afghanistan,” he said. “These extremists are not the first to kill in the name of God; the cruelties of the Crusades are amply recorded. But they remind us that no holy war can ever be a just war. For if you truly believe that you are carrying out divine will, then there is no need for restraint – no need to spare the pregnant mother, or the medic, or even a person of one’s own faith.

The president said that “adhering to this law of love has always been the core struggle of human nature. For we are fallible.”

However, he said, reaching for perfection and ideals will make the world a better place. The nonviolence practiced by Mahatma Gandhi and the late Rev. Martin Luther King Jr., winner of the 1964 Nobel Peace Prize, “may not have been practical or possible in every circumstance, but the love that they preached – their fundamental faith in human progress – that must always be the North Star that guides us on our journey.”

“Let us reach for the world that ought to be – that spark of the divine that still stirs within each of our souls,” he said.

“There’s no simple formula here,” he said. “But we must try as best we can to balance isolation and engagement, pressure and incentives, so that human rights and dignity are advanced over time.”

Obama said some of the concepts of just war – self-defense, proportionate response and sparing civilians – have rarely been observed.

“The capacity of human beings to think up new ways to kill one another proved inexhaustible, as did our capacity to exempt from mercy those who look different or pray to a different God,” he said.

Although in the 20th century nations put structures in place to prevent wars, especially nuclear wars, the nature of war has changed, he said. Ethnic and sectarian conflicts and secessionist movements – wars within nations – are putting civilians more at risk, he said.

“I do not bring with me today a definitive solution to the problems of war,” he said. “What I do know is that meeting these challenges will require the same vision, hard work, and persistence of those men and women who acted so boldly decades ago. And it will require us to think in new ways about the notions of just war and the imperatives of a just peace.”

Obama said nations must look at the seemingly irreconcilable truths that instruments of war help keep the peace and that “no matter how justified, war promises human tragedy.”

He also said the security does not exist in places where people do not have access to enough food, clean water, medicine or shelter.

“The absence of hope can rot a society from within,” he said.