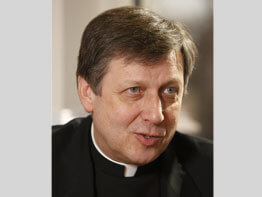 The office’s top priority, according to the White House release, will be “making community groups an integral part of our economic recovery and poverty a burden fewer have to bear when recovery is complete.”

It also will focus on reducing demand for abortions, encouraging fathers to stand by their families and working with the National Security Council to “foster interfaith dialogue with leaders and scholars around the world.”

The council will advise the White House and federal agencies on a range of topics, from hiring policies for private agencies that accept federal funds to how national security issues are affected by religious beliefs.

Mr. Dubois, 26, is a graduate of Boston University and Princeton University’s Woodrow Wilson School of Public and International Affairs who at 18 began serving as an associate pastor at a Pentecostal church in Cambridge, Mass.

At the National Prayer Breakfast earlier the same day, President Obama said the goal of the office “will not be to favor one religious group over another – or even religious groups over secular groups. It will simply be to work on behalf of those organizations that want to work on behalf of our communities, and to do so without blurring the line that our founders wisely drew between church and state.”

He said such work is important because “few are closer to what’s happening on our streets and in our neighborhoods than these organizations. People trust them. Communities rely on them. And we will help them.”

The president said the advisory council would be used to help “foster a more productive and peaceful dialogue on faith. I don’t expect divisions to disappear overnight, nor do I believe that long-held views and conflicts will suddenly vanish.

“But I do believe that if we can talk to one another openly and honestly, then perhaps old rifts will start to mend and new partnerships will begin to emerge,” he said. “In a world that grows smaller by the day, perhaps we can begin to crowd out the destructive forces of zealotry and make room for the healing power of understanding.”

Mr. Chavez told Catholic News Service that his background in community organizing before he joined the Mexican American Cultural Center was a factor in his invitation to join the advisory committee.

As he waited for a flight back to San Antonio after the private ceremony where the executive order was signed, Mr. Chavez said the council priority closest to his heart would be helping poor youths and young adults.

“We need to reach young people with meaningful access to education and jobs,” he said.

Even assistance as basic as helping parents more effectively maneuver the educational system can make a dramatic difference in communities like those where he worked as an organizer, he said.

Father Snyder, also reached by CNS on his way to the airport after the White House event, commented on the mandate for the faith-based office to work with the National Security Council to foster interfaith dialogue. He said it is an acknowledgment that better understanding of the religious motivations of the players in global problems “can only increase our national security.”

He said in meeting with the first 15 people named to the council Feb. 5, President Obama laid out his philosophies about the faith community’s role in the work of government.

Father Snyder said that in the Bush administration’s approach to faith-based programs “what we had was an ally, an advocate” in easing the path for organizations such as Catholic Charities to work with the federal government.

Regarding Obama’s approach, he said that “by establishing this council it seems to bring it to the next level,” where advice and guidance from people with expertise in working with the poor, for example, are being actively sought by the administration.

The new council’s structure and ways it will function were still being worked out, said Father Snyder. The executive order calls for it to have a total of 25 members who will serve one-year terms, which can be renewed.

Father Snyder said the one-year term is because Obama wants to keep fresh voices on the council. Members were told to expect the first meeting to take place in about three months and that they would meet about four times a year, he said.

The first 15 members represent a wide range of religions and political philosophies.