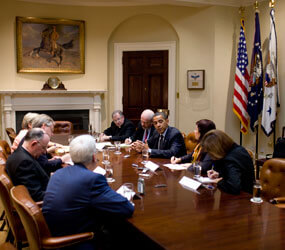 WASHINGTON – There will always be solid differences of belief over whether abortion should be legal, but that doesn’t mean common ground isn’t possible on how to reduce abortion, President Barack Obama told a round table of religion reporters July 2.

In a session timed in advance of Obama’s scheduled July 10 meeting at the Vatican with Pope Benedict XVI, the president reiterated that while he continues to seek common ground on reducing the number of abortions, he recognizes that there will always be firm differences between people who believe abortion should be legal and those who do not.

The round table touched on a wide range of domestic and international policy issues.

He told the eight reporters, most of whom were from the Catholic press, that he sees “an irreducible difference … on the abortion issue. … The best we can do is suggest that people of good will can be on either side, but you can’t wish those differences away.”

He said he has never “been under the illusion that … we were going to simply talk all our differences away on these issues.”

A task force he has formed to seek common ground on reducing abortion is still developing recommendations, the president said.

But he expects agreement on significant areas, such as “on the idea of helping young people make smart choices so that they are not engaging in casual sexual activity that can lead to unwanted pregnancies, on the importance of adoption as an option, an alternative to abortion, on caring for pregnant women so that it is easier for them to support children.”

It will be more difficult to find common ground on other areas, he added.

“I personally think that combining good sexual … and/or moral education needs to be combined with contraception in order to prevent unwanted pregnancies,” he said.

“I recognize that contradicts Catholic Church doctrine, so I would not expect someone who feels very strongly about this issue as a matter of religious faith to be able to agree with me on that, but that’s my personal view,” he said. “We may not be able to arrive at perfectly compatible language on that front.”

The Catholic Church teaches that artificial contraception is immoral and that abortion is the killing of innocent human life. Representatives of many churches, including Catholics, are among those who have been participating in the administration’s common ground efforts.

On the other hand, Obama said, “I would be surprised if those who believe abortion should be legal would object to language that says we should try to reduce the circumstances in which women feel compelled to obtain an abortion.

The U.S. Conference of Catholic Bishops has urged Obama to oppose any expansion of access to abortion, whether through loosening of legal restrictions or measures such as legislation passed by Congress that would allow the District of Columbia to resume paying for abortions for poor women using local tax funds.

When Obama reversed the Mexico City policy, Cardinal Justin Rigali of Philadelphia, chairman of the U.S. bishops’ Committee on Pro-Life Activities, called it “very disappointing.” The policy had prohibited the use of federal family planning funds by organizations that provide abortions or counsel women to have abortions.

“An administration that wants to reduce abortions should not divert U.S. funds to groups that promote abortions,” cardinal he said.

In a speech to a convention of Louisiana priests in April, Cardinal Francis E. George of Chicago, president of the bishops’ conference, reported on his private meeting with Obama in March, criticizing the president’s position on abortion.

The cardinal said he told the president, “You’ve given us nothing but the wrong signals on this issue. So, we’ll see, but I’m not as hopeful now as I was when he was first elected.”