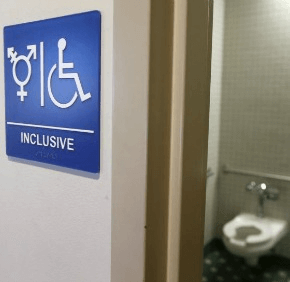 By Catholic News Service
WASHINGTON – The Obama administration’s May 13 directive on transgender access to bathrooms “that treats ‘a student’s gender identity as the student’s sex’ is deeply disturbing,” said the chairmen of two U.S. Catholic bishops’ committees.
“The guidance fails to address a number of important concerns and contradicts a basic understanding of human formation so well expressed by Pope Francis: that ‘the young need to be helped to accept their own body as it was created,’” the two bishops said in a statement May 16.
The statement was issued by Bishop Richard J. Malone of Buffalo, New York, who is chairman of the U.S. Conference of Catholic Bishops’ Committee on Laity, Marriage, Family Life and Youth, and Archbishop George J. Lucas of Omaha, Nebraska, who chairman of the USCCB’s Committee on Catholic Education.
The directive, or guidance, was issued by the U.S. Department of Justice and the U.S. Department of Education. The departments said it applies to all public schools and colleges and universities that received federal funding. It “summarizes a school’s Title IX obligations regarding transgender students,” they said, and also explains how the Education and Justice departments will “evaluate a school’s compliance with these obligations.”
The federal Title IX statute prohibits sex discrimination in educational programs and activities, like sports. AP reported that the Obama administration earlier had warned schools that denying transgender students access to the facilities and activities of their choice was illegal under its interpretation of federal sex discrimination laws.
In their statement Bishop Malone and Archbishop Lucas noted that the Catholic Church “consistently affirms the inherent dignity of each and every human person and advocates for the well being of all people, particularly the most vulnerable.”
“Especially at a young age and in schools, it is important that our children understand the depth of God’s love for them and their intrinsic worth and beauty. Children should always be and feel safe and secure and know they are loved,” they said.
They said that children, youth and parents in “difficult situations,” such as the focus of the federal guidance, “deserve compassion, sensitivity and respect.”
“All of these can be expressed without infringing on legitimate concerns about privacy and security on the part of the other young students and parents,” the two prelates said, but pointed out that the guidance issued May 13 “does not even attempt to achieve this balance.”
“It unfortunately does not respect the ongoing political discussion at the state and local levels and in Congress, or the broader cultural discussion, about how best to address these sensitive issues,” they said. “Rather, the guidance short-circuits those discussions entirely.”
They quoted Pope Francis, who said recently that “biological sex and the sociocultural role of sex (gender) can be distinguished but not separated.
“We pray that the government make room for more just and compassionate approaches and policies in this sensitive area, in order to serve the good of all students and parents, as well as the common good,” Bishop Malone and Archbishop Lucas said. “We will be studying the guidance further to understand the full extent of its implications.”