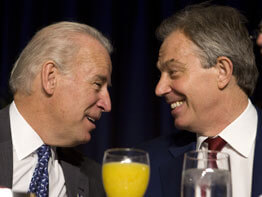 WASHINGTON – President Barack Obama and former British Prime Minister Tony Blair struck similar themes in remarks to the National Prayer Breakfast Feb. 5, telling of their own faith roots and noting that the world’s major religions all hold a core doctrine of caring for others.

President Obama also used the occasion to say that later in the day he would formally announce the establishment of the White House Office of Faith-Based and Neighborhood Partnerships, a reworking of the faith-based office established by President George W. Bush.

Later that morning President Obama signed an executive order creating the new office and a new council of advisers.

Looking around the Washington hotel ballroom with thousands of guests from around the world, President Obama said at the breakfast, “It strikes me that this is one of the rare occasions that still brings much of the world together in a moment of peace and good will.”

Noting that by their very nature the beliefs of various faiths “will never be the same,” President Obama said, “No matter what we choose to believe, let us remember that there is no religion whose central tenet is hate. … There is no God who condones taking the life of an innocent human being. This much we know.”

Mr. Blair, who became a Catholic a few months after he left office in June 2007, made similar observations about the world’s religions and their teachings about peace. He also said that “religion is under attack from without and from within. From within it is corroded by extremists who use their faith as a means of excluding the other. … If you do not believe as I believe, you are a lesser human being.

“From without, religious faith is assailed by an increasingly aggressive secularism, which derides faith as contrary to reason and defines faith by conflict,” said Mr. Blair, according to a text provided by his office. “Thus do the extreme believers and the aggressive nonbelievers come together in unholy alliance.”

Both Mr. Blair and President Obama told of how their experiences with people of faith helped inspire their own search for God.

Mr. Blair explained how a teacher knelt and prayed with him as he worried about his ailing father.

“Now my father was a militant atheist,” he said. “Before we prayed, I thought I should confess this. ‘I’m afraid my father doesn’t believe in God,’ I said. ‘That doesn’t matter,’ my teacher replied. ‘God believes in him. He loves him without demanding or needing love in return.’ ”

“That is what inspires,” Blair said, “the unconditional nature of God’s love. A promise perpetually kept. A covenant never broken.”

President Obama explained that he was not raised with strong religious traditions.

“I had a father who was born a Muslim but became an atheist, grandparents who were nonpracticing Methodists and Baptists, and a mother who was skeptical of organized religion, even as she was the kindest, most spiritual person I’ve ever known,” the president said.

“She was the one who taught me as a child to love, and to understand, and to do unto others as I would want done,” he said.

He explained that he became a Christian after he moved to the South Side of Chicago after college. In his work as a community organizer, his office was in a Catholic church.

“It happened not because of indoctrination or a sudden revelation, but because I spent month after month working with church folks who simply wanted to help neighbors who were down on their luck – no matter what they looked like, or where they came from, or who they prayed to,” President Obama said.

“It was on those streets, in those neighborhoods, that I first heard God’s spirit beckon me. It was there that I felt called to a higher purpose – his purpose,” he said.

President Obama said that sense of a higher purpose is what led many in the audience of varied faiths and nations to the annual prayer breakfast.

The National Prayer Breakfast is a privately organized annual event that draws participants from around the world to several days’ worth of events. Participation by the sitting president dates back to President Dwight Eisenhower.

Among world leaders who reportedly attended this year were Philippine President Gloria Macapagal-Arroyo, Haitian President Rene Preval and the prime ministers of Albania, Macedonia and Mauritius. Current and past members of Congress, governors, Cabinet members and Supreme Court justices also are typically among the guests.

The event is closed to press coverage, except for a small group admitted with the president.