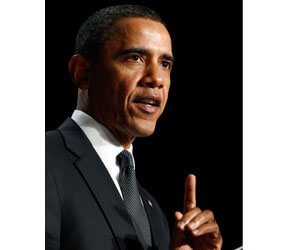 WASHINGTON – It is his faith in God, particularly “that biblical injunction to serve the least of these, that keeps me going and that keeps me from being overwhelmed,” by the challenges of his office, President Barack Obama said in remarks to the National Prayer Breakfast Feb. 3.

“It’s faith that reminds me that despite being just one very imperfect man, I can still help whoever I can, however I can, wherever I can, for as long as I can, and that somehow God will buttress these efforts,” he said at the annual gathering in Washington.

Also among speakers who talked about the role of faith during personal crises were a survivor of last year’s Chilean mine disaster and astronaut Mark Kelly, husband of Rep. Gabrielle Giffords, the Arizona congresswoman shot during a neighborhood event in Tucson Jan. 8.

Obama told of getting strength from prayer for everyday challenges – like for patience when sending his 12-year-old daughter, Malia, off to her first dance “where there will be boys” – as well as for the issues he faces as president.

“I pray for my ability to help those who are struggling,” he said. “Christian tradition teaches that one day the world will be turned right side up and everything will return as it should be. But until that day, we’re called to work on behalf of a God that chose justice and mercy and compassion to the most vulnerable.

“We’ve seen a lot of hardship these past two years. Not a day passes when I don’t get a letter from somebody or meet someone who’s out of work or lost their home or without health care,” he continued. “Sometimes what I can do to try to improve the economy or to curb foreclosures or to help deal with the health care system – sometimes it seems so distant and so remote, so profoundly inadequate to the enormity of the need.”

At those times, he said, “is my faith, then, that biblical injunction to serve the least of these, that keeps me going and that keeps me from being overwhelmed.”

Much of the president’s remarks were personal, a reflection, perhaps, of the confusion among Americans about his religion. A poll in 2010 showed one in five people think he is a Muslim.

“When Michelle and I hear our faith questioned from time to time, we are reminded that ultimately what matters is not what other people say about us but whether we’re being true to our conscience and true to our God,” he said, quoting the Gospel of Matthew: “Seek first his kingdom and his righteousness and all these things will be given to you as well.”

And he talked about his appreciation for the people around the country who pray for him, and about the commonality of Christianity he shares with some of his toughest political opponents.

“It’s also comforting to know that people are praying for you who don’t always agree with you,” Obama said. “(Sen.) Tom Coburn, (R-Okla.) for example, is … is not only a dear friend but also a brother in Christ. We came into the Senate at the same time.

“Even though we are on opposite sides of a whole bunch of issues, part of what has bound us together is a shared faith, a recognition that we pray to and serve the same God,” the president said. “And I keep praying that God will show him the light and he will vote with me once in a while. It’s going to happen, Tom. A ray of light is going to beam down.”

Speaking after the president, Kelly, a Catholic, said since his wife’s shooting he’s come to believe in fate for the first time, and to consider that “maybe it’s possible this is just one small part of (God’s) plan.”

While the rampage that left six people dead and 13 injured was horrible and tragic, Kelly said, “maybe something good can come of all this. Maybe it’s our responsibility to see that something does.”

Kelly, a Navy captain, described visiting the impromptu memorial on the lawn outside University Medical Center in Tucson, with its candles, statues of saints, flowers and other religious images.

“It was like stepping into a church, a place with heaven itself as its ceiling,” he said. The sacred atmosphere reminded him, he said, that a building isn’t needed to pray.”You pray where you are. You pray when God is there in your heart.”

He added that he has become very aware that prayer is more than asking God for things, it also is listening and expressing gratitude, “which I’ve done a lot lately.”

His wife has been moved to a rehab hospital in Houston, where Kelly works for NASA.

One of the survivors of the Chilean mine disaster, Jose Enriquez, said that before the group was rescued in October, two months after a major cave-in, the miners came to believe “we really had only one alternative, and that was God himself.”

He said some of the miners taught others how to pray. “As we prayed, we began to know the presence and blessing of God with us down in the mine,” he said through a translator.

The National Prayer Breakfast is a privately organized days-long event attended by politicians, diplomats, religious leaders and other public figures from around the world. Press coverage is limited to a small portion of the main event and to media representatives admitted with the president. Presidents dating back to Dwight Eisenhower have typically attended.