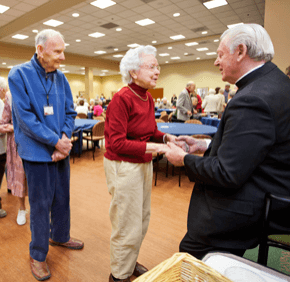 By Elizabeth Lowe
elowe@CatholicReview.org
PARKVILLE – When Sulpician Father Joseph J. Bonadio began celebrating Mass at Oak Crest retirement community in the spring of 1995, about 40 Catholic residents attended the liturgies.
In nearly 20 years, the number of Catholics who attend Masses at Oak Crest has swelled to several hundred.
Many from Father Bonadio’s flock – about 300 – attended a Jan. 29 retirement celebration in his honor. His final day as Catholic chaplain was Jan. 31. No successor has been named.
“I am humbled by this gathering,” Father Bonadio, a soft-spoken priest, said at the Jan. 29 event. “I’m blessed to have these 18, 19 years of being chaplain of Oak Crest. We started from nothing and we built a wonderful Catholic community. It’s a blessing for me to serve you as I have over the years.”
The youngest of three brothers, Father Bonadio grew up at St. Francis of Assisi in Baltimore. He entered St. Mary’s Seminary and University in Roland Park in 1960, was ordained in 1964 and entered the Sulpicians in 1970.
In the nearly 50 years since his ordination, Father Bonadio’s ministry has included serving at St. Thomas Seminary in Louisville, Ky; St. Mary’s in Roland Park; St. Patrick’s Seminary and University in Menlo Park, Calif.; Theological College of the Catholic University of America in Washington, D.C.; what is now Notre Dame of Maryland University in Baltimore; and St. Charles Villa in Catonsville where he resides.
Father Bonadio, who was associate pastor of St. Francis of Assisi from 1990 to 2001, is a weekend associate at the parish. He continues to celebrate Masses at Oak Crest on a regular basis.
“God has been good to me and I’m grateful for the privilege to serve,” said Father Bonadio, 76, who will celebrate his golden jubilee as a priest in May.
Monsignor William F. Burke, pastor of St. Francis of Assisi, described Father Bonadio as “a very dedicated priest.”
“He’s a prayerful man, he’s very accommodating to help people when and where he can,” Monsignor Burke said.
Father Bonadio, a musician, plays “When the Saints Go Marching In” very well on the trombone, Monsignor Burke said.
“That’s my signature (song),” said Father Bonadio, who played the trombone at Oak Crest on numerous occasions. “I always liked it.”
Gloria Tilghman, an Oak Crest resident for 16 years, met Father Bonadio at St. Francis of Assisi in 1970.
“He is one in a million,” Tilghman said. “This (Oak Crest’s Catholic community) would never be here if it wasn’t for him.”
Father Bonadio offered the funeral Mass for Tilghman’s husband, Philip, 16 years ago.
Margaret Sellmayer, an Oak Crest resident for 17 years and member of the Catholic Community Council for more than 15 years, called Father Bonadio “the foundation of the Catholic community at Oak Crest. He’s left the spirit of loving and helping one another.”
“He always put the residents first,” said Mission Helper of the Sacred Heart Sister Danielle Murphy, pastoral administrator of Oak Crest’s Catholic community. “He’s a priest’s priest.”
Pastor Elmer Klein, from Oak Crest’s Protestant community, praised Father Bonadio for his spirit and ecumenical approach.
“The man is just too good,” Pastor Klein said. “I don’t know why we can’t see a halo. I hope all of you have caught a wonderful spirit of unity here between the Protestants and Catholics. That is largely due to the leadership of Father Joe. He has made us what we are today, two separate communities but one in Christ.”
Also see:
‘Zaching’ continues to inspire, while founder is in hospice care
Pope at audience: Make sure your children are confirmed
For more 50-plus stories, check our our Boomers and Beyond page.
PrevNext