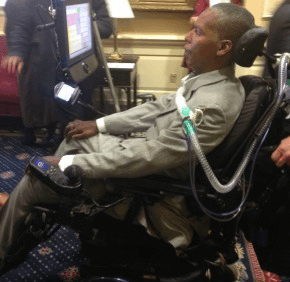 By George P. Matysek Jr.
gmatysek@CatholicReview.org
Twitter: @ReviewMatysek
ANNAPOLIS – Although he is largely incapacitated and can’t speak without the aid of a computerized voice, O.J. Brigance believes his life has value.
It was a message of hope the former Baltimore Ravens linebacker hammered home when he came out strongly against the proposed legalization of physician-assisted suicide in Maryland.
“Every day, every hour, every minute, every second of life, is God-given and valuable,” Brigance told members of the Senate Judicial Proceedings Committee during a March 10 hearing on the Death with Dignity Act. “To enact this legislation would devalue the lives and possible future contributions of Marylanders.”
Brigance noted that when he was diagnosed eight years ago with Amyotrophic Lateral Sclerosis (ALS), the news was daunting, both for himself and his wife. Someone diagnosed with ALS typically lives for two-to-five years from onset, he said.
“Once we grieved, we came to the decision that adverse circumstances in no way delete purpose or destiny in one’s life,” said Brigance, who currently serves as senior advisor to player development for the Ravens. “Have there been days where it has been challenging? Of course. However, I did not create my life, so I have no right to negate my life.”
Brigance’s testimony was a highlight of a marathon, emotionally-charged hearing that was expected to feature the testimony of 80 people, many struggling with life-threatening illnesses and disabilities.
Proponents of the Death with Dignity Act argued the measure would allow suffering people to end their lives on their own terms. Opponents called the bill dangerous, especially to those with physical and mental disabilities.
The bill would allow doctors to prescribe a lethal dose of medicine at the request of a patient who has been given less than six months to live.
Brigance emphasized that because he decided to live the best he could after his diagnosis, “there has been a ripple effect of goodness in the world.” He noted that in 2008, he and his wife, Chanda, created the Brigance Brigade Foundation to “equip, encourage and empower” those living with ALS.
“With the use of no hands, I was able to write a book two years ago,” Brigance said. “I can’t tell you of the numerous people who have been encouraged through their own personal struggle because I decided to face my struggle against ALS. Since being diagnosed, I have done a greater good for society in eight years, than in my previous 37 years on earth.”
Although he said he doesn’t know how many days he has left to live, Brigance insisted that “each and every one has a purpose.”
“The thought that there would be a legal avenue for an individual to take his or her own life in a moment of despair – robbing family, friends and society of their presence and contribution to society – deeply saddens me and is a tragedy,” he said.
Bill supporters argued that the legalization of physician-assisted suicide is meant to give people more “choices” at the end of their lives.
Steve Sachs, former Maryland attorney general, described his friendship with Dick Israel, a former assistant attorney general for whom the bill is named. Israel is suffering from Parkinson’s disease.
“Dick Israel is a mind imprisoned in a body that is useless,” Sachs told the committee. “He can’t do anything. He can’t express anything. It’s a matter of incapacity.”
Sachs called it an indignity for his friend to lie in a hospice bed, “diapered” and dependent on others to care for virtually every bodily need.
“It’s about not wanting to end that way,” Sachs said.
In questioning Sachs, Sen. James Brochin of Baltimore County said that he recently met with constituents at a Catholic church, one of whom noted that her husband was given six months to live after being diagnosed with cancer. Two years later, his cancer is in remission and he is still alive. If the bill had been law, Brochin said, that person may have taken his life right away.
In written testimony, Mary Ellen Russell, director of the Maryland Catholic Conference, said she was dismayed by the message sent by the legislation to those who might feel their illness and the care they require is “nothing more than a burden to their families and the rest of society.”
“A terminally ill patient requesting a prescription to commit suicide deserves to be surrounded by compassion,” Russell said, “not handed a prescription to take his or her life.”
Russell said the bill does not include a clear requirement that a patient requesting a prescription to commit suicide be screened for depression.
“It is entirely up to the discretion of the patient’s attending physician or consulting physician to decide whether the patient should be referred for a competency evaluation,” she said, noting that neither the attending nor the consulting physician are required to have any expertise in evaluating a patient’s mental health.
“The bill,” Russell said, “essentially allows a doctor to provide a patient a lethal prescription to take his or her life without any requirement that the patient first be offered appropriate therapeutic interventions to ensure his or her request isn’t simply the result of an understandable depressed condition upon learning they have a terminal diagnosis.”
Also see:
Assisted suicide bills working their way through states, including Maryland
Archbishop Lori: Dying with dignity
Part 3 of Playing God: Do no harm? End-of-life ethics in a death with dignity culture
PrevNext