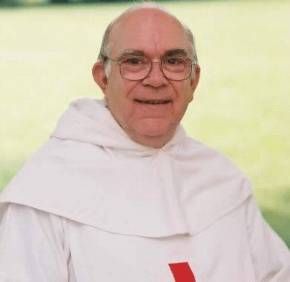 By Erik Zygmont
ezygmont@CatholicReview.org
Trinitarian Father John Leo Dorn, a Baltimore native who served as pastor and associate pastor of St. Lawrence Martyr, Jessup, as well as in several leadership roles for the Pikesville-based Trinitarians, was remembered for his compassion for friends in need as well as his technological brilliance.
Father Dorn died March 7 at age 72.
A memorial Mass was offered the morning of March 11 in New Jersey. A funeral Mass will be offered March 12, 11 a.m., at Holy Trinity Monastery, 8400 Park Heights Ave., Pikesville. There will be a viewing in the monastery chapel from 10 a.m. until the start of the funeral Mass.
Father Dorn grew up in Baltimore, where he attended school and Mass at Sacred Heart of Jesus in Highlandtown. He graduated from Calvert Hall College High School in 1960 and from Johns Hopkins University in 1975. That summer, he committed to joining the Trinitarians. He studied theology at Washington Theological Union and St. Mary’s Seminary and University. On Aug. 15, 1981, Father Dorn was ordained to the priesthood at Holy Trinity Monastery.
Trinitarian Father James Day, secretary provincial for his order and rector at DeMatha Catholic High School, Hyattsville, says that he knew Father Dorn “when he was Brother John.”
“He was always very, very kind to other people,” said Father Day. “If you had a problem, John was the one people would go to.”
“Once he was ordained,” Father Day continued, “we began to discover that in addition to his human dimension he had a serious intellectual dimension as well.”
As computers arrived and began to revolutionize the workplace, Father Dorn was there as “the spearhead behind bringing technologies into the [Trinitarian] offices of the provincial administration,” Father Day said.
“Sometimes brilliance can remove a person from human interaction,” continued Father Day, “but not John…One of the human traits I would like John to be remembered for was his ability to reach out to many, many people.”
Father Dorn headed the Trinitarians’ development office for many years, Father Day noted, and served as the order’s provincial leader from 1993-1999 and 2002-2003, in addition to other leadership positions over the years.
Trinitarian Father Aaron Dowdell met Father Dorn while the latter was studying at Washington Theological Union. The same age, the two became fast friends.
“John was probably one of the most giving people you could ever meet,” said Father Dowdell. “No challenge was too big, whether it was a personal problem or something needing to be repaired.”
Father Dowdell noted that Father Dorn loved movies, a good meal and New Orleans. While Father Dowdell was serving as pastor at Our Lady of Good Counsel, New Orleans, in the early 1980s, Father Dorn made the trip multiple times, for Jazz Fest and Mardi Gras.
“He will be missed tremendously,” said Father Dowdell.
Father Dorn served as pastor for St. Lawrence Martyr from 2006-2009 and as associate pastor from 2009-2010. While at St. Lawrence Martyr, Father Dorn also ministered to the prisons of Jessup.
To read more obituary articles, click here.
Also see:
O.J. Brigance leads opposition to assisted-suicide bill
Pro-life marchers take to streets of Annapolis to support life at all stages
PrevNext