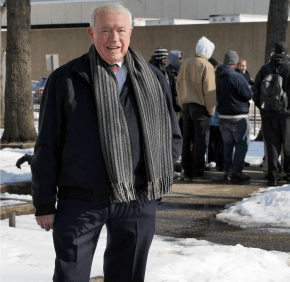 By Erik Zygmont
ezygmont@catholicreview.org
While the harmonies of the St. Bernardine Church Choir set the tone for the 36th annual Archdiocesan Social Ministry Convocation, a major award winner at the event recommends the Bee Gees for those who find themselves in the nitty-gritty of saving a life.
Retired  cardiologist Dr. Raymond Bahr, who is internationally recognized for his life-saving work in promoting a proactive response to the earliest signs of a heart attack, received the John Hook Award March 7 at the convocation, held annually at The Seton Keough High School in Baltimore. Bahr notes that when it comes to a heart attack, bystander involvement is crucial.
“Nowadays if you hear a thump and see somebody on the ground, not breathing and not responding and no pulse, you just start pumping on the chest – quickly, quickly,” Bahr said.
Ideal for mouth-free CPR, Bahr said, is 110 pumps to the chest per minute, making two-inch depressions. Most people can visualize a two-inch depression; the timing is the tricky part. But he has a tip that can help.
“Do it to the tune of ‘Stayin’ Alive,’” Bahr instructs.
The Bee Gees nugget is a teeny component of Bahr’s groundbreaking work in cardiology. More than three decades ago, he founded the country’s first “early heart attack care” unit at Baltimore’s St. Agnes Hospital. There are now 1,100 similar units in the U.S.
Bahr has been instrumental in pushing for the installation of automated external defibrillators – instrumental in on-site heart attack treatment – in public places. He says that the public “ought to be outraged” over the estimated 800,000 annual heart-attack deaths in the U.S., and he is “deputizing” people willing to bring this number down.
“When the sheriff out West had a crisis, he deputized everybody in town,” said Bahr. “We’re doing the same thing.”
So far, some 382,000 people have taken Bahr’s course – available at deputyheartattack.org – and pledged to act when faced with someone in the throes of a heart attack.
His cardiology work is just one of several ways that Bahr, a parishioner at St. Vincent de Paul in Baltimore, has answered the church’s call to social ministry.
“He’s an unsung hero,” said Rosemary Thompson of the 2015 Convocation Planning Committee, which recognized Bahr and 19 others.
He has joined with the Archdiocese’s Beyond the Boundaries program in steadfastly advocating for inclusionary housing policies.
“We’re constantly going upstream to provide the opportunity for people living in areas of concentrated poverty to live in more mixed housing,” Bahr said, explaining that better living circumstances afford better chances of overcoming poverty.
He has also been a longtime advocate for the Chesapeake Bay, working with City Councilman James Kraft to identify the primary source of the tons of trash that poured into the besieged body via the Harris Creek outfall, not far from Bahr’s home in Baltimore’s Canton neighborhood.
It turns out that the source was the backyards of about 100 vacant properties – dubbed “mini-landfills” by Bahr. The city’s inattention to these north-of-the-waterfront properties indicated a larger, systemic problem, Bahr noted.
“They were creating two Baltimores,” he said. “One was getting a lot of services, and one wasn’t getting much at all.”
Both Bahr , 79, and his wife, Patricia, have four children, seven grandchildren and two great-grandchildren. The two have spent considerable time and energy in the service of Ss. James and John Catholic Elementary School in East Baltimore.
“Ninety-eight percent of the students are African-American, and most of them are non-Catholic,” Bahr said, “but we’re there because we want to spread the good news and also for fairness, so these young folks can have a quality education with a Christian background.”
He and his wife have set up two funds for the school, where Bahr serves on the board.
Bahr also rolls up his sleeves every Friday to feed the homeless that gather and camp at Fayette and President streets, alongside St. Vincent de Paul Church.
Bahr and the convocation’s other award winners practice Archbishop William E. Lori’s exhortation to “go well beyond our comfort zone and accompany in love those who are searching for love, for truth, for justice, for life’s most basic necessities.”
In doing so, said Archbishop Lori in his remarks at the convocation, Catholics are fulfilling Pope Francis’ call to live according to “The Joy of the Gospel,” the pope’s 2013 apostolic exhortation and the theme of the convocation.
Toward the end of a fiery keynote address, Sister of Notre Dame de Namur Patricia Chappell, executive director of Pax Christi USA, summed up the path rejected by Bahr and the other award winners:
“We can remain the same, be comfortable, stay insulated, grow old unchallenged and become stuffy,” she said. “We may remain good Catholics, but will we be good Christians?”
Honorees
The following were honored at the 36th annual Archdiocesan Social Ministry Convocation.
John Hook Award – Dr. Raymond Bahr
Doris Johnson Community Award – Albert A. Logan (posthumous)
Bishop P. Francis Murphy Social Ministry Recognition Awards
Holy Family Catholic Community, Middletown: Paul Bergstrom, service; Tracy Hickman, advocacy
St. Ann, Baltimore: St. Ann’s Sista Circle, service
St. Anthony of Padua, Baltimore: Beth Dykton, service; John Whalen, advocacy
St. Cecilia, Baltimore: Robert Viner, service, Gail DeVance, advocacy
St. Dominic, Baltimore: Bert Peters, service; Anthony De Luca, advocacy
St. Francis of Assisi, Baltimore: Betty Ciesla, service; Gerard Vetter, advocacy
Church of the Immaculate Conception, Baltimore: Natalie Dugger-Fleming, service
St. Joseph, Cockeysville: Tony and Joanne Nasuta, service
Most Precious Blood, Baltimore: Ivor LaBarrie, service; Mary Krall, advocacy
St. Vincent de Paul, Baltimore: Pat Frascati, service; Chuck Frascati, advocacy
Also see:
Longtime social ministry convocation attendees say service is part of who they are
An open door and a renaissance: Mount St. Mary’s says goodbye to Dr. Powell
Warm welcome: Burmese immigrants find haven at Our Lady of Victory Parish
PrevNext