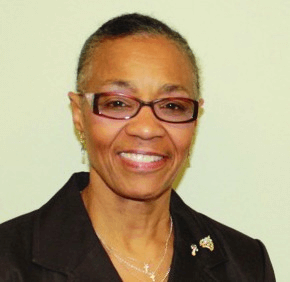 By Keith Meisel
Special to the Review
When it comes to living with diabetes, Michelle Sheldon-Rubio isn’t shy about offering some food for thought about a disease with which 1.4 million Americans are diagnosed every year.
“It’s (all about) meal planning,” the Baltimore nurse said. “How do you eat? How does it fit into your schedule? When you approach it that way, you don’t see it as something restrictive. Meal planning and activity is the foundation.”
Sheldon-Rubio, 64, promotes a healthy lifestyle not just among her patients at St. Agnes Hospital, but for her fellow parishioners of St. Matthew in Northwood, where the staff includes her husband, Deacon Steven Rubio.
In addition to seeing patients at St. Agnes, Sheldon-Rubio leads a community support group for those with diabetes; is part of the hospital’s outreach at Security Mall, which includes testing for high blood pressure and diabetes; and has taught staff and clients at Blind Services of Maryland in Lansdowne.
Her passion for teaching and support were recognized recently with Health Monitor’s Life Changer Award for Diabetes Educators. According to a St. Agnes spokeswoman, Sheldon-Rubio is the first winner of the award from the hospital.
The Life Changer award was especially meaningful, she said, because it began with a patient nomination that noted that Sheldon-Rubio had created a “dynamic change” in her life.
At their first meeting, the patient was overweight, on high cholesterol and blood pressure medications, and very frustrated. For 30 minutes, the patient flailed and cursed her, Sheldon-Rubio recalled. Finally, she sat still. They held hands, eyes closed. Then the healing began.
“Sometimes,” she said, “you have to listen to what they’re not telling you, the pauses, and read between the lines.”
Less than a year later, the patient had lost 70 pounds, was off medications and had normal test readings, thanks in part to gastric bypass surgery.
“Diabetes is all about lifestyle,” reiterated Sheldon-Rubio, the mother of two and grandmother of three.
Several family members have diabetes and her grandmother died with complications of the disease, said Sheldon-Rubio, who has had her own share of health scares.
“I’ve been given life seven times over,” she said, of surviving four heart attacks. “I’ve been brought back from the rim so many times.”
Sheldon-Rubio, who entered nursing school after graduating from Baltimore’s Western High School in 1969, worked for Johns Hopkins, Good Samaritan, Bon Secours and other hospitals before St. Agnes.
Her day begins at 4 a.m., with 45 minutes of exercise. She cooks the family evening meal at their home in Roland Park, using spices from a huge cabinet in her kitchen and herbs from her garden for the vegetables that dominate the dish. Twice a week, the meals are meatless.
Her wellness includes a substantial dose of faith.
“Spirituality has to embrace all aspects of life,” she said. “It infuses every part of your life. You have to walk it. You have to be it.”
“She’s very energetic,” said Father Joseph Muth Jr., pastor of St. Matthew since 1990. “She has taken on every responsibility we’ve asked her to take on; sacristan, member of the gospel choir, liturgy committee.”
Volunteering with the parish’s health ministry, Sheldon-Rubio has tried to change attitudes and practices. That can be as simple as replacing bagels with mini-muffins and fruit juice with fresh fruit offered at community meetings or reducing the number of heavy, noodle-based dishes at a parish fundraiser.
Still, it can be a challenge, as St. Matthew has parishioners from 45 countries who like to bring food that represents their culture, according to her pastor.
“When she cooks for parish events,” Father Muth said, “she makes great, healthy food.”