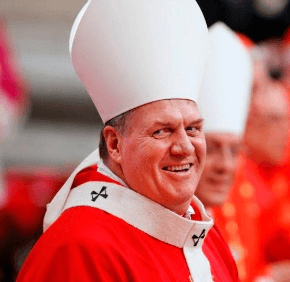 Announcing the names of the new cardinals Oct. 9, Pope Francis said, “Their coming from 11 nations expresses the universality of the church that proclaims and witnesses the good news of God’s mercy in every corner of the earth.”

The new cardinals – 13 of whom are under the age of 80 and therefore eligible to vote in a conclave to elect a new pope and four over 80 being honored for their “clear Christian witness” – will be inducted into the College of Cardinals Nov. 19, the eve of the close of the Year of Mercy.

The next day, Nov. 20, they will join Pope Francis and other cardinals in celebrating the feast of Christ the King and closing the Year of Mercy, the pope said.

Shortly after the pope’s announcement, Archbishop Tobin tweeted: “I am shocked beyond words by the decision of the Holy Father. Please pray for me.”

The first of the new cardinals announced by the pope was Archbishop Mario Zenari, who, the pope explained, “will remain apostolic nuncio to the beloved and martyred Syria.”

The last of the cardinals he named was Albanian Father Ernest Simoni, an priest of the Archdiocese of Shkodre-Pult, who will turn 88 Oct. 18. He had moved Pope Francis to tears in 2014 when he spoke about his 30 years in prison or forced labor under Albania’s militant atheistic regime.

Ordained in 1956, he was arrested on Christmas Eve 1963 while celebrating Mass and was sentenced to death by firing squad. He was beaten, placed for three months in solitary confinement, and then tortured because he refused to denounce the church.

He was eventually freed, but later arrested again and sent to a prison camp, where he was forced to work in a mine for 18 years and then 10 more years in sewage canals.

In creating 13 cardinal-electors — those under the age of 80 — Pope Francis will exceed by one the 120 cardinal-elector limit set by Blessed Paul VI. The number of potential electors will return to 120 Nov. 28 when Cardinal Theodore-Adrien Sarr of Dakar, Senegal, celebrates his 80th birthday.

The youngest of the new cardinals — who will be the youngest member of the College of Cardinals — is 49-year-old Archbishop Dieudonne Nzapalainga of Bangui, Central African Republic.

When violence broke out in his country, the archbishop along with a Protestant leader and a local imam began working together to build peace and counter efforts to turn the conflict into a religious war. Archbishop Nzapalainga hosted Pope Francis during a visit to Central African Republic in November 2015.

Seven of the 11 nations represented by the new cardinals did not have a cardinal at the time of the pope’s announcement: Central African Republic, Bangladesh, Mauritius and Papua New Guinea will now have cardinal-electors. Malayasia, Lesotho and Albania will be represented in the College of Cardinals, although their cardinals will be too old to vote in a conclave.

Here is the list of new cardinals in the order in which Pope Francis announced them:

— Archbishop Zenari, an Italian who is 70 years old.

Court rules in favor of Archdiocese of Baltimore on free-speech

When political choice is tough, pray and vote your conscience, pope says