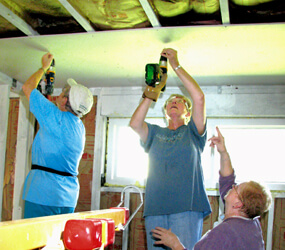 NEW ORLEANS – Dressed in T-shirts emblazoned with the phrase “Volunteer, Make it a Habit,” about 80 nuns from congregations nationwide worked side by side in New Orleans Oct. 5-9, swinging hammers and hanging wallboard in homes devastated by Hurricane Katrina in 2005.

They were part of “Nuns Build,” a volunteer religious effort coordinated by the nonprofit St. Bernard Project and Ursuline Sister Regina Marie Fronmuller and Dominican Sister Mary Keefe, both of whom have been ministering to New Orleanians since Hurricane Katrina.

“There’s a need here, and sisters are responsive – that’s what we do,” Sister Mary said of the effort. “We help people. Others have come, so why not the sisters? I knew that they would respond.”

“It didn’t take much,” Sister Regina Marie said. “They were so willing to help.”

The nuns are among 17,000 volunteers who have helped rebuild 244 homes not only in the civil entity of St. Bernard Parish but also in New Orleans East and Gentilly since the St. Bernard Project began in July 2006. While other nuns have accompanied church groups since Katrina, this was the first all-nun group, Sister Regina Marie told the Clarion Herald, newspaper of the New Orleans Archdiocese.

They said they were following their foundress Margaret Aylward’s cause to help the less fortunate, just as they had done after Hurricane Betsy in 1965. They plan to stay indefinitely.

“It’s nice to see this neighborhood coming back again,” said Sister Nancy, who had previously taught in New Orleans Catholic schools for 10 years. “Anybody we’ve met down here has said ‘thank you’ for coming. They feel like no one is coming to help them. This is like a lifeline for them. For some of them, it’s taken so long.”

A few blocks away at a second house in Arabi, Dominican nuns, novices and candidates were laying down a thin layer of compound on the joints between sections of drywall.

Dominican Sister Patricia Ann Smith, who had met many Louisianans over the 10 years she had worked with African-Americans in California, shed tears when describing how a retreat roused her to react to the devastation left after Hurricane Katrina.

“I felt so sorry for all the people,” Sister Patricia Ann said. “It was an extraordinary catastrophe. It felt like they (New Orleanians) were unhelped. We weren’t giving them enough help. I know the help that I’m going to give is only a tiny little, but if everyone gives a little, it helps out. I know if somebody is helping me, it gives me hope. I hope by all the sisters being here, it brings hope.”

St. Bernard Project co-founder Zack Rosenburg said the volunteer labor of the nuns was putting a dent in the rebuilding process, especially in St. Bernard Parish where the project began.

“They are going to move the houses forward significantly and show our clients that the country cares and their church cares,” Rosenburg said. “New Orleans is a Catholic community and, unfortunately, the church here was devastated. The people in St. Bernard have told me they want to know that the church is behind them.”

He appreciates the work of the nuns. He believes that once they return to their communities they will spread the word about the amount of work still needed to get families back home and encourage volunteers.

Rosenburg said volunteer labor keeps rebuilding costs down. On average, it takes eight to 12 weeks and $15,000 to complete a home from the studs. The St. Bernard Project is currently rebuilding 50 homes, with a goal of completing 100 homes in 2009. The homes being rebuilt have primarily been for the elderly, the disabled and families with children, he said.

“Our goal is to work ourselves out of a job,” St. Bernard Project’s Allie Wilmes said. The nuns’ participation “demonstrates that anybody can be useful and help. It’s not just big, burly men.”

“We’re not going to go anywhere until we are done,” Rosenburg said. “The goal is to solve the problem, so there is a lot left to do.”