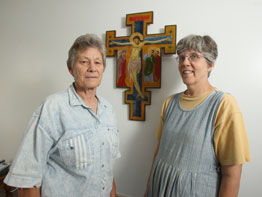 Two Baltimore nuns who have been peace activists for decades expressed shock that Maryland State Police listed them as suspected terrorists in a federal database.

“This promotes fear in ordinary citizens to speak up and to even go to a meeting or take a position when they realize that by doing so, they could be put on some kind of a terrorist list,” said Sister Carol Gilbert, one of the two Dominican nuns.

Sister Carol, 60, and Sister Ardeth Platte, 72, returned to Baltimore to find Oct. 8 letters from the state police saying they had been incorrectly placed on the list of names put into the database, shared among law-enforcement agencies.

State police Superintendent Terrence B. Sheridan sent the form letters to the two nuns and 51 others who had been put in the database, saying they could review “relevant” database entries, which would then be expunged.

Greg Shipley, a state police spokesman, said the superintendent recognized it was “inappropriate” to include the 53 names on the list and therefore agreed to purge them.

During the 14 months of surveillance covered by the report, Thomas E. Hutchins was state police superintendent under then-Gov. Robert L. Ehrlich Jr.

Sisters Carol and Ardeth, members of Jonah House, a West Baltimore community that protests war, have been arrested dozens of times over the years. Each served a prison sentence of more than 30 months after a felony conviction for breaking into a U.S. nuclear missile silo in Colorado in 2002 and painting crucifixes with their own blood.

The nuns complain that their names have now been published in newspapers and on Web sites all over the world and picked up in an untold number of databases.

Though state police have agreed to expunge their names, she said, “The damage is done. Our names have gone across the world as terrorists.”

The nuns question why they ended up on the terrorism list and have demanded all information state police have gathered about them, not just what the agency deems “relevant.” But, they say, the state police have denied that request.

Mr. Shipley said state police would not confirm the identifications of anyone on the list nor give any reasons why they were placed on it. He would not comment on why only information the state police deemed “relevant” would be released.

While maintaining the state police actions could discourage others from protesting, Sisters Carol and Ardeth said they’ll continue doing so to speak out against what they call immoral U.S. military actions in Iraq and Afghanistan.

“We are attempting to be faithful to the Gospel and to the non-violent Jesus,” Sister Carol said.

The American Civil Liberties Union, which had sued to get information on the surveillance, said state police violated individual rights, spread the names of those targeted to numerous other law-enforcement agencies and raised questions about how many others had been named suspected terrorists and for how long.