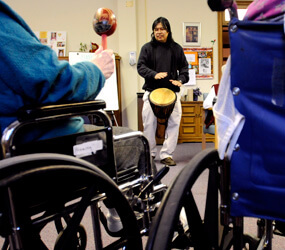 NEW ORLEANS – U.S. communities of women and men religious need to reach out to young Catholics to let them know about religious life and those communities also should have a full-time vocations director, said a Mercy sister involved in a new major study of vocations.

“What’s happening now, particularly with those who are younger is that a lot of them haven’t had direct experience with men and women religious through the school or parish” where they grew up, said Sister Mary Bendyna.

The nun is executive director of the Center for Applied Research in the Apostolate and principal author of the “Study of Recent Vocations to Religious Life,” released Aug. 11.

It was conducted by CARA, a research center based at Georgetown University in Washington, on behalf of the National Religious Vocation Conference, a professional association of religious vocation directors based in Chicago.

The study surveyed 4,000 men and women who are in formation or newly vowed members.

It showed that religious communities of men and women report diminishing numbers with aging populations. But it also showed that orders are attracting more ethnically and culturally diverse members; those choosing religious life today are passionate about it; and some orders are cultivating vocations from the millennial generation.

Sister Mary and Holy Cross Brother Paul Bednarczyk, executive director of the National Religious Vocation Conference, discussed the study in a session during the Aug. 11-14 assembly of the Leadership Conference of Women Religious in New Orleans.

They also talked about it in an interview with the Clarion Herald, newspaper of the New Orleans Archdiocese.

The fact that the study showed a marked decrease in new vocations to religious life among women and a pronounced aging of the overall population of women religious was not surprising and confirmed what a lot of those communities’ leaders already knew, said Sister Mary.

“We knew we were old, but we are older than we thought,” she said. “That presents some challenges because a lot of communities don’t have anyone in formation.”

Seventy-five percent of men and “a little over 90 percent of women religious are age 60 and over. These are finally professed people,” she said.

At the same time the study showed that 43 percent of the men and women in formation are under the age of 30.

“That in itself is encouraging,” said Brother Paul.

“Younger people are re-looking and rethinking the possibility of a religious vocation,” he continued. “Given the demographics, that does produce generational challenges with an aging population. How do you attract and retain younger members? But it is clear that the people who are coming to religious life find great joy in this life.”

The finding that there is a lot of diversity among newer vocations, with the Latino, Asian and Pacific Islander communities represented, was especially encouraging, said Sister Mary and Brother Paul.

The communities of women religious that have attracted the most vocations appear to be the ones considered “more traditional in religious life,” added Sister Mary.

“There is a pattern that those who are getting new members, particularly higher numbers, are the more traditional in religious life with more common prayer and common community life,” she said. “In many cases, they still are wearing the habit. Those factors do make a difference.”

Young people seem to be seeking communities that promote eucharistic adoration, daily Mass and the Liturgy of the Hours, or Divine Office.

“It’s not that older religious don’t do that, but they may put less emphasis on that,” Sister Mary said.

A particular attraction for some is “community life,” she said. “In the past, there was more attraction to go into religious life to do a particular ministry, such as a teacher or a nurse. That’s still important, but it is not primary. They are looking for real spiritual and communal life.”

“They’re looking to a community for support in order to deepen their commitment to that ministry as well as deepen their Catholic faith,” Brother Paul said.

He said that he thinks the new study has “simply brought into the public forum what people have been saying in private conversation.”

“I do think people are ready to have conversations around communal living, Catholic identity, and prayer and spirituality,” he added.

Another purpose of the study was “to identify some best practices for vocation promotion,” he said. “First of all, there has got to be a commitment to vocation ministry. There’s a high correlation of a community attracting and retaining members when it has a full-time vocation director.”

Another important factor is “personal contact with community members,” he said, through mission trips, discernment retreats and “come and see” weekends, all of which put young people in contact with religious.

In congregations with a commitment to build a culture of vocations, promoting vocations was the “corporate responsibility” of the entire community, not just the duty of the vocations director, he said.

Asked if he is worried about the future of religious life, Brother Paul replied: “We’ve been around for 2,000 years and we have faced worse crises. Religious life will survive.”