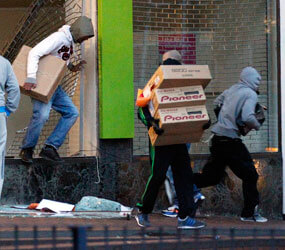 LONDON – Catholic nuns who live near London neighborhoods hit by riots are working with local authorities to help – and even counsel – homeless victims.

Members of the Sisters of Marie Auxiliatrice, a French-based community, made their decision after attending an ecumenical prayer vigil amid smoldering ruins and husks of burned-out vehicles in the British capital’s Tottenham district.

Dublin-born Sister Sylvia McCarthy told Catholic News Service Aug. 10, “The shops were burned out completely, and many people lived over those shops, and they had very little time to get out of their apartments.

“The people were in an awful state,” she said. “They are short of everything.”

Sister Sylvia said she felt very sorry for the victims of the violence, which she described as “aimless.”

“I have been here over 20 years and I have seen the improvement in Tottenham since I first arrived,” she said. “They built up lovely shops, and those shops are now just shells. They are burned to the ground.”

Many residents took with them only the clothes they wore – in some cases pajamas – then watched as their homes burned, shocked by the reality of becoming suddenly homeless and losing nearly all their possessions.

Sister Margarita Foley, a native of Ireland’s County Cork, offered to counsel anyone suffering from trauma. The trained counselor said her first instinct was to listen to people’s stories in an attempt to discern the true cause of the problem.

But although she said she feels compassion for many of those involved, she said: “We have become a culture which is looking out for everyone else to sort out our problems. We never ask ourselves ‘What can I do?’

“There is a new generation now and they never seem to have enough,” she said. “I look at the rest of the world, at areas where they have very little, and I say to myself ‘What is it with us that we never have enough no matter what is provided?’

“A lot of people who are coming to Britain now are coming from deprived areas. They are creative in coming here, but when they get here they fall into the cycle of complaining about everything,” Sister Margarita added.

The nuns also offered their help to the social services department of Haringey Council, the local authority, and collected clothing for some 45 families.
The riots erupted in the Tottenham area, the scene of similar riots in 1985, following the Aug. 4 shooting there by police of an armed man, Mark Duggan.

Looting and arson spread to other parts of the capital and to such cities as Birmingham, Manchester, Liverpool and Bristol over the three consecutive nights.

The violence has left at least five people dead, caused tens of millions of pounds of damage and has resulted in more than 800 arrests, including a boy of 11.

The riots, mostly involving gangs of hooded Afro-Caribbean and white youths, were condemned as “shocking” by Archbishop Vincent Nichols of Westminster, which includes Tottenham and some of the other affected areas of London.

He said Aug. 9 the riots represented a “callous disregard for the common good of our society and show how easily basic principles of respect and honesty are cast aside.”

“I ask that Catholics pray especially for those directly affected by the violence, for those facing danger on our streets, for those whose livelihood has been ruined, for those marked by fear, for those whose parents are worried about the behavior of their youngsters and for those who, at this time, are being tempted into the ways of violence and theft,” said Archbishop Nichols, president of the Bishops’ Conference of England and Wales.

In Birmingham, where three Muslim men were killed Aug. 9 by a hit-and-run driver as they tried to defend properties from looters, Father Gerry Breen, dean of St. Chad’s Catholic Cathedral, urged the faithful to pray to Blessed John Henry Newman to intercede “for our city and our people” Aug. 11, the day the cardinal died there in 1890.