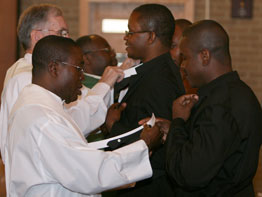 Novice master Father Roderick Coates, S.S.J., explained the First Temporary Profession is “their promise to live (the Josephite) constitution, to abide by the rules and dictates of the religious society, and to work in the apostolate,” which he said serves the African-American community.

Mr. Ajuruchi, Mr. Udeagu and Xavier Edet, N.S.S.J., pronounced their vows of “chastity, poverty, and obedience” as members of St. Joseph’s Society of the Sacred Heart June 22. Each began his spiritual formation in Nigeria, said Father Coates, and has now completed his spiritual year at the Mary Immaculate Novitiate of the Josephite Fathers and Brothers in Baltimore.

In addition to Father Coates and Father Inwang, Josephite Superior General Father Edward Chiffriller, S.S.J., officiated at the Mass. Father Chiffriller administered the Order of Rite for the profession following the Gospel and also offered the homily.

“ ‘Fear not’ appears 365 times in the Scriptures,” Father Chiffriller said. “God knew at times it was going to be difficult to be his people, his disciples.”

He later told the novices that their journey as part of the priesthood may not always be easy. “There will be obstacles, challenges, persecutions,” he said. “But take my word – it will be worth it.”

Each novice made his promise while kneeling with his right hand placed on the open Scriptures, held by the seated Father Chiffriller. The superior general blessed each novice’s Roman collar, which was then fastened under each man’s habit.

The novices will next go to St. Joseph’s Seminary in Washington, D.C., for their theology courses in pursuit of a Master of Divinity degree, said Father Coates.

The novices will then make perpetual promises, Father Coates said, and move on to ordination as priests.

“It has taken us six years to get to this point today,” said Mr. Udeagu, “and we still have some years ahead, so we pray that God continues to see us through.”