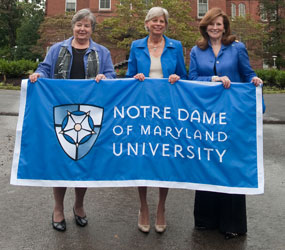 Two weeks into attending College of Notre Dame of Maryland, Rebecca Bruzdzinski knew about the school’s historic place in Baltimore. She got advanced preparation from an aunt who had attended the school as well.

But, the Essex native also understands that Notre Dame has been evolving for years, such as adding a popular men’s and women’s weekend college, as well as a pharmacy school. To better reflect the school’s changes, Notre Dame officials announced late last year it was becoming Notre Dame of Maryland University.

There was perhaps no better day to make the transition official than Sept. 9, which coincided with the 116th anniversary of Notre Dame opening its doors.

“Today, I feel like it’s my university,” Bruzdzinski said following a dedication ceremony inside the campus’ LeClerc Hall. “No matter what, this school is always about seeking the truth.”

Signs of the designation change were everywhere, including its revamped website, ndm.edu.

Hundreds of people from the school’s community packed LeClerc Hall for the Mass and ceremony, with members of the university’s founding order, the School Sisters of Notre Dame, in attendance.

“We thank God for raising this school to the status of university,” Bishop Madden said. “Over 110 years ago, this place began as a home of learning and it continues on to this very day, growing and growing.”

During his homily, Father Kennedy praised the university’s long-ranging impact. “In the history of this university is embedded an educational excellence dedicated to the moral imperative that learning brings with it responsibility to use learning for the betterment of the lives of others,” he said.

Both Bishop Madden and Father Kennedy cited the sacrifices and dedication of the School Sisters of Notre Dame, who provided the school’s spirit and mission and continue their work today.

Mary Pat Seurkamp, who will retire as president of the university this school year, told attendees that the SSND’s “steadfast faith and steely conviction have transformed the world through education.” She said she was among those who have been “privileged to carry forth the SSND mission into as new century of innovation for Notre Dame.”

School Sister of Notre Dame Kathleen Cornell, the order’s provincial leader, said the school’s original building, now called Gibbons Hall, is a reminder of the six women in the first graduating class of 1899.

“At night, the light from its tower proclaims its vision of education to the City of Baltimore and beyond,” she told attendees. “Becoming a university gives us the opportunity to continue our story to educate and build community for the good of all.”

P.J. Mitchell, chairman of the school’s board of trustees and member of the school’s class of 1969, said Notre Dame is the third largest provider of teachers in the state, the country’s only women’s university with an on-campus pharmacy school.

Moving forward, Mitchell said, Notre Dame of Maryland University will be inspired by its past.

“We,” Mitchell said, “do not take our name lightly.”