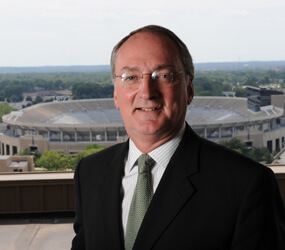 INDIANAPOLIS – Jack Swarbrick, athletic director at the University of Notre Dame for the past year, said “a common thread of faith” weaves through every part of his life.

The Notre Dame graduate, lawyer and father of four said it was great to be in a place “where faith is central” and integrated into all parts of campus life, even down to the football players going to Mass together before games.

Prior to taking on the high-profile job with perhaps the most recognized college athletic program in the country, Swarbrick was an employment lawyer in Indianapolis focusing on sports initiatives. He served as an instrumental behind-the-scenes leader in helping the city secure deals with many athletic organizations from earning the bid to host the 2012 Super Bowl to becoming the home of the National Collegiate Athletic Association.

In his first year as athletic director at the Indiana university, Swarbrick had a front-row seat to all the Notre Dame football games. The 2008 season that ended with seven wins and six losses also gave him an insider’s look at the team and its head coach, Charlie Weis.

“We had a football season that fell short of our hopes,” Swarbrick says. “Given the time of my arrival, you sort of have to deal with that quickly and get engaged in that. So that was part of the challenge of the first year.”

In an interview with The Criterion, archdiocesan newspaper in Indianapolis, Swarbrick said his favorite moments during his first year had to do with the accomplishments of the student-athletes.

“Some of those moments are on-field victories, but a lot more of them tend to be personal moments,” he said, referring to how athletes handle victories and defeats and seeing them get scholarships and honors.

Athletes that stand out for him include last year’s senior class members of the women’s soccer team who went to the Final Four in the NCAA soccer tournament three times and twice to the final game.

When they lost the final game during their senior year, the teammates were devastated, he said, and he was too. “I don’t know if I’ve ever been more emotionally invested in the outcome of a game than I was then. Feeling, frankly, their pain but appreciating what an extraordinary group of young women this is – and all they had accomplished,” he said.

A moment at the end of that game will always stick with him. He said the team was “obviously just heartbroken” as they waited through the lengthy trophy presentations.

“When it was over, they all walked slowly off the field to the locker room. And no one took the second-place trophy. They had accepted it graciously, but they left it sitting behind them. It was an image I’ll never forget because that’s not what they came for. None of them had a particular interest in bringing it home,” he said.

Swarbrick, who grew up in an Irish Catholic family in New York, said one of his own disappointments is that his parents aren’t alive to see him at the helm of Notre Dame’s athletics “because, in so many ways, this would have been exactly what they aspired for me to do.”

But the 1976 graduate of Notre Dame says he gets the most joy from “being able to give back to a place that had such an impact on my life.”

He sees his job as a chance to make the Notre Dame community better. “Many of our fans think I have the best job in the world,” because of their love of Notre Dame athletics. “It’s certainly good for that reason,” he said, but for him the better part is that he gets to “contribute to the development of Notre Dame through athletics.”

One challenge of the job is the public scrutiny. He said he is comfortable with it but he knows that on any given day he can go online and find people describing him as “an absolute idiot.”

He also knows that after every Notre Dame football game people are looking for his reaction.

“I’m aware that people are watching me watch the game. So I’m very careful. I think some people can confuse that for a lack of passion. But there’s a certain stoicism one has to have when you’re in this position,” he said.

But he is hardly detached as he watches the games because he has come to personally know players and coaches.

“I desperately want my teams to win, but these are now people I know well,” he said. “I know how hard this student-athlete is working in the classroom to maximize his performance. His aspirations in life are so high, you want everything for him.

“So the dropped pass or the spectacular reception are both felt on more personal terms than their impact on the game. You feel for the young man,” he said.