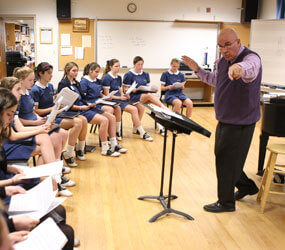 TOWSON – As a composer, William Watson spends months, if not years, with a piece inside his head, wondering what it would sound like with a full orchestra and chorus.

On April 12, his latest opus will make its debut at Notre Dame Preparatory School, making use of nearly 30 student musicians and 60 voices. The five-movement, 35-minute “The Spirit of Notre Dame” is a tribute to the 138-year-old girls’ school, which is celebrating its 50th anniversary at its campus in Towson.

“I’m really grateful for the opportunity, because a lot of composers have to beat the bushes for work,” said Watson, who has been creating and polishing the piece for two years. “It’s really great to be commissioned and have somebody say, ‘We like your music and we want you to write something for us.’ ”

The project began two years ago, when NDP officials asked that the music reflect the spirit of the school and its motto, “Veritatem Prosequimur – We Pursue Truth.”

Watson solicited feedback from 250 members of the NDP community, through conversations and an online survey. Many of the comments form the lyrics of one of the movements, “We are NDP.”

“This is stuff the kids say themselves,” Watson said. “I put it all in there.”

School Sister of Notre Dame Patricia McCarron, headmistress of NDP, said the school wanted a tribute that would endure.

“We saw this year as an opportunity to celebrate our history and be grateful for the blessings Notre Dame has received, not only on this campus, but in the last 138 years,” she said. “We wanted to do some special things that were very intentional and reflective of the mission of the school.”

Watson’s daughter, Jamie, is a sophomore at NDP. He has served as musical director of the Archdiocese of Baltimore’s Celebration of the Arts for several years and is the chairman of the Community College of Baltimore County’s Department of Performing Arts and Humanities.

Watson has gotten to collaborate with old friends on the project. He has known Alex Dzbinski, NDP’s music chairman and director of bands, for about 40 years. The pair were in the music program together at Overlea High School, where their choir teacher was Gerald Smith, now on the music faculty at NDP as well.

Watson has come to the school in recent weeks to work with students on the piece. Most of the time has been spent with individual performing sections. He is eager to hear the piece as a whole.

Dzbinski said students added learning Watson’s piece while they were working on others for spring adjudications.

“The girls have responded very well,” Dzbinski said. “It was a little grueling at first, but once they started to hear the piece come together, they started liking it more and more.”

The effort draws praise from students, such as junior chorale member Maria Conner.

“If I was to sit down and write a song about our school, I don’t know if I’d be able to do it,” she said. “It’s cool were all doing this together, because it reminds us of our sisterhood.”

Colleen Cumberpatch, a senior chorale member, had previously performed under Watson at the Celebration of the Arts.

“I was so impressed,” she said. “It was unbelievable that someone could come up with this great composition and it’s all about your school.”

Junior band member Cathy Ryback said it will be a lasting gift.

“Hopefully,” she said, “we’ll be able to come back throughout the years and hear this song that will be so special to our school.”

The April 12 concert premiering the five-movement work celebrating Notre Dame Preparatory’s 50th anniversary at its Towson campus, begins at 7:30 p.m. It is free and open to the public. The school is located at 815 Hampton Lane in Towson.