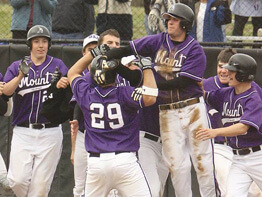 For the past 25 years, Dave Norton has been at the helm of Mount St. Joseph High School, Irvington, baseball. Steeped in the tradition of baseball excellence, Norton beams with pride, recalling the number of players and their families who have touched his life for more than a quarter of a century.

“Along with my family, St. Joe is the love of my life,” said Norton. “It has been a great thrill, as a coach, to have the opportunity to work with so many fine young men.”

Over the years, Norton has notched 12 first-place league finishes, reigned as back-to-back league champs in 1986 and 1987, won the MSA title in 1996 and the MIAA championship title in 2004. And, with a .880 win percentage, Norton looked for his 500th win against Calvert Hall College High School, Towson, on April 24 at home. (The game was played after The Catholic Review went to press.)

The Gaels have been up and down but recently reeled off three straight wins for an upsurge in a very tough MIAA A Conference with crucial wins over St. Paul’s in Brooklandville, Archbishop Curley in Baltimore, and Archbishop Spalding in Severn.
Those three wins improved the Gaels’ record to 6-4 in the league and 12-7 overall, forging a three-way tie for second place behind the undefeated Calvert Hall Cardinals.
The Gaels are a well-rounded club focused on solid defense with offensive contributions coming from a number of players. Senior outfielder Mitch Perez, junior Kevin Taylor and senior first-baseman Timmy Biggs have stepped up for the Gaels this season with the left-handed, lead-off hitter Biggs crushing the ball and batting .526.

Senior Brandon White was the man of the hour in the Gaels’ extra inning 5-1 win at Spalding with a lighting bolt line drive blast over the right centerfield wall to bring in three runs.

With speed on the base paths in junior Drew Tokosch, and savvy, heads-up play behind the plate in senior catcher Zach Kiehne, the Gaels pose a comprehensive threat down the stretch.

On the mound the Gaels have a variety of go-to guys who can throw strikes. The St. Joe ace this season is junior Ryan Kemp (4-1), and in middle and short relief are juniors Danny Druzgala (4-1) and Tommy Miller (2-1). Miller picked up the win against Curley and Spalding, allowing only one hit in his outing against Spalding.

Norton notes that sophomore Dave Angeletti shows a lot of promise for the team at shortstop and Mike Lafferty’s speed in the outfield has typified the hustle and desire of the Gael players this season.

When asked about highlights on the season, Norton could give two or three instances of stellar plays or pivotal moments but what he focused on most was the $18,000 his ballplayers raised in one night during the school’s annual phone-a-thon. Norton explained that the team was driven to succeed for a second year running, securing 150 alumni commitments totaling more than $18,000 for the school.

When you talk about commitment and priorities, Norton recognizes that baseball is one piece of the puzzle at Mount St. Joseph, and he prides himself and his team on giving everything they have toward serving the institution that elicits so much pride and joy.